It was a mixed quarter for the HDFC Bank, whose credit growth softened pulled down by a slowdown in auto loans as well as corporate advances.

It was a mixed quarter for the HDFC Bank, whose credit growth softened pulled down by a slowdown in auto loans as well as corporate advances. Brokerages anticipate mild stress in certain quarters, but given its retail focus and strong capital position, say the bank should be able to pull it off in the coming quarters.
Credit growth stood at 17 per cent in Q1 as against 24 per cent registered in the past three quarters.

The softening is led by moderation in auto loans, corporate asset run-down and base effect in the unsecured segment. “Also, higher provisioning in unsecured lending and increased provisioning for agriculture loans led to higher-than-expected credit cost. That said, sustained momentum in net interest income (NIM at 4.3 per cent) coupled with higher operating expenses at sub-20 per cent spurred earnings growth,” noted Edelweiss Securities. 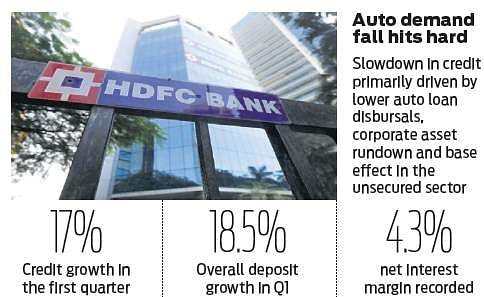 According to the brokerage, while slippages rose marginally driven by agriculture accounts, higher provisions on unsecured book warrants a closer look. It doesn’t rule out stress in certain pockets given the increased frequency of borrowing and over-leveraging. However, the bank’s focus on existing salaried customers and strong risk management practices lend comfort, Edelweiss reasoned.

The below-trend loan book growth has some disturbing points. While retail credit slowed, non-retail advances too were disappointing given the market opportunity and the bank’s lower stress pool.
Jefferies India believes the bank’s management has likely taken a counter-cyclical approach on unsecured loans taking the foot off the pedal, besides stepping up provisioning on multiple parameters.

Unsecured loans like personal loans and cards, account for 18 per cent of total loans and 26 per cent of retail loans, and given the consumption slowdown, the bank may prefer to go counter-cyclical. Overall deposits grew 18.5 per cent year-on-year, driven by strong term deposits, which offset slower savings deposits growth.

“The latter is not because of customers moving out, but a part of them moving to term deposits. HDFC has been focusing on garnering retail deposits growth, which could support overall loan book growth. Consequently,  it has kept its term deposit rates competitive. As a consequence, term deposits became more attractive than savings deposits. Overall, the bank has factored in the higher cost of funds in the lending spreads,” Jefferies noted.

Stay up to date on all the latest Business news with The New Indian Express App. Download now
TAGS
HDFC bank