With six subsidiaries and nearly 30 associates and joint ventures, Coffee Day Enterprises’ consolidated debt as on March 2019 stood at over Rs 6,500 crore.

HYDERABAD: Even as over-indebtedness was crushing him and the company, Coffee Day Enterprises founder VG Siddhartha continued borrowing, raising as much as Rs 1,500 crore in last six months. Data from the Registrar of Companies shows that capital was raised mostly by pledging shares, but not a penny was used to retire existing debt.

As recent as in May, another Rs 175 crore was borrowed from Piramal Trusteeship Services, even as the company mounted efforts to pare debt by offloading promoter stake in other entities. But it is unclear where the capital was deployed, while tax officials aren’t ruling out suspicious transactions. “The Board should assure that a thorough investigation is undertaken and the true state of affairs will be disclosed and transparecny ensured,” Shriram Subramanian, founder, InGovern Research Service, told TNIE.

Interestingly, the Rs 3,200 crore proceeds from L&T towards 20.32 per cent stake sale in Mindtree was of little use. On March 22, complying with the income-tax department, which attached Mindtree shares, the holding entity Coffee Day Enterprises opened an escrow account for Rs 3,000 crore (again by pledging shares) with IDBI Trusteeship Services Ltd. As opposed to reducing the group debt, the transaction didn’t offer any respite.

VG Siddhartha's last letter to Cafe Coffee Day employees and Board of Directors: says he 'failed as an entrepreneur, fought for a long time but today I give up.'#VGSiddhartha #CCD

In all, with six subsidiaries and nearly 30 associates and joint ventures, Coffee Day Enterprises’ consolidated debt as on March 2019 stood at over Rs 6,500 crore, including debt of another listed entity, Sical Logistics.

From a letter purportedly written by Siddhartha, which the tax sleuths dismissed due to a mismatch in signature, the valuation of the companies he founded far exceeds the overall debt, raising questions about why he resorted to an alleged attempted suicide.

The flagship brand Coffee Day Global Ltd alone is valued at Rs 7,000-8,000 crore, which is 3-4 times its current revenue run rate of Rs 2,200 crore. Reportedly, Siddhartha was in talks with beverage giant Coca-Cola to sell it for an estimated Rs 10,000 crore. 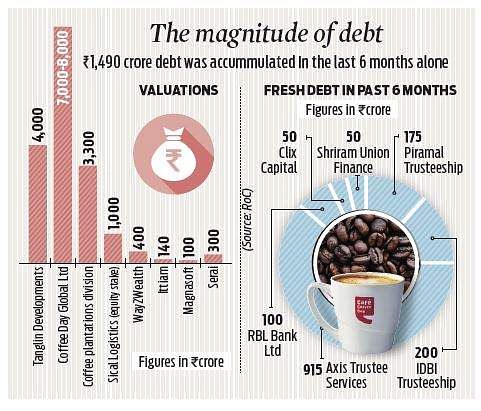