Hyperlocal grocery is the newest battlefield for e-commerce firms

Swiggy, for instance, has launched the ‘Stores’ business which will deliver from stores across the spectrum from kiranas and supermarkets to florists, health supplements and baby care.

The Indian online hyperlocal grocery delivery segment has begun recording robust growth and competition is heating up with the entry of food delivery major Swiggy into the fray. Having recently raised $1 billion in funding, Swiggy is gearing up to target major hyperlocal grocery platforms like the Alibaba Group-backed BigBasket, Softbank-funded Grofers, and Google-funded hyperlocal app Dunzo.

With new players entering the business, customers are primarily looking to buy from nearby stores which they are familiar with. Another reason for the rapid growth is increasing mobile internet penetration, which e-commerce platforms are cashing in on.

Swiggy, for instance, has launched the ‘Stores’ business which will deliver from stores across the spectrum from kiranas and supermarkets to florists, health supplements and baby care.

Currently being piloted in Gurgaon, Swiggy has begun delivering from over 3,500 stores, including more than 200 merchant-partners like Ferns and Petals, Le Marche, Needs Supermarket, Licious, Zappfresh, MomsCo, Apollo and Guardian Pharmacy. 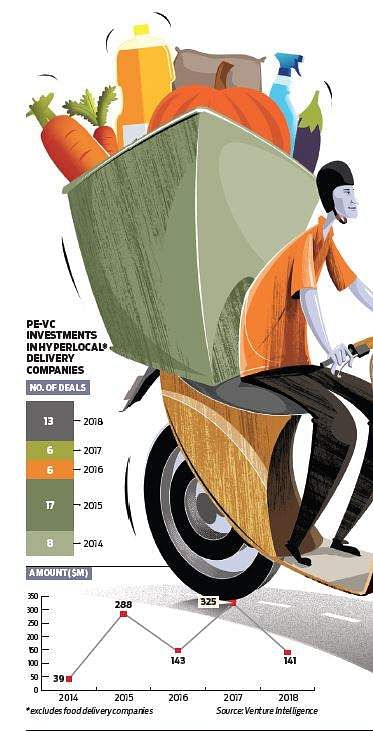 The Indian online grocery market, analysts say, has undergone an evolution and is now in the high growth stage. One indication is the large amount of VC money which began flowing into the segment in early 2015. While this declined in the latter half of 2016, funding has again improved in 2018 as consumption began improving.

“The services delivered through hyperlocal business models have always had a large market, be it, concierge, grocery, food or pharma. Though the sector witnessed a temporary slump in terms of deal activity as scale became a challenge with the pressure on unit economics, any optimization of logistics cost would have a direct impact on customer experience,” said EY in a report.

This report also said that the PE/VC interest in hyperlocal delivery was revived with Google’s investment in Dunzo. Companies like Swiggy, Zomato, Grofers, Milkbasket, Dailyninja, etc. have subsequently been able to raise funds for expansion. “The companies focused on improving unit economics by improving order densities, the frequency of delivery to achieve operating efficiencies and use technology to optimize operations and improve customer experience,” noted EY.

According to advisory firm RedSeer, India’s grocery market is pegged at over $500 billion, out of which a mere 0.2 per cent ($1.2 billion) is online. Of this, around $1 billion would be hyperlocal grocery. “Given this massive potential, we expect the online market to continue chugging along at a 50 per cent growth rate for the next few years… This will be served by various models, including category specialists and narrow and wide supermarkets,” RedSeer said.

The market is currently dominated by players like Grofers and Bigbasket and others like omnichannel players Spar and Spencers. ‘Vertical focused’ players like meat sellers, milk sellers need to go long way to gain scale, experts say. However, meat delivery players like Licious, Nandu’s Chicken and daily essentials company like DailyNinja, Milkbasket, Suprdaily are also trying out models to gain market share.

Major e-commerce players like Flipkart and Amazon are also trying to tap into the opportunity. Flipkart has launched its online grocery store Supermart which sells household staples, snacks, and beverages and packaged food, while US-based Amazon has launched ‘Amazon Pantry’.

“The Indian grocery business offers huge potential. With the existing infrastructure and delivery fleet, Swiggy’s entry is a great move. But, I believe that in the long run, inventory-based online grocery will be a more profitable and sustainable model,” said Arvind K Singhal, CMD, Technopak.