There are Rs 4.46 lakh crore of stalled residential projects across the country and their developers have become locked in a downward spiral with shadow banks.

Ashish Shah is caught in the middle of India’s latest financial crisis. As chief operating officer of Radius Developers, he’s struggling to fund construction of apartment complexes because of a liquidity crunch in the nation’s bloated shadow-banking sector.

“Real estate is a sitting duck,” said Shah. “The timing is very crucial as the slowdown has hit the real estate market quite hard. The industry can’t service interest, new interest, additional interest, because there is no cash flow.”

Radius and hundreds of other developers relied on loans from what India calls non-banking financial companies (NBFCs) to fuel a five-year property boom. That came to a halt a year ago with the default of one of the shadow banking sector’s leading lenders, Infrastructure Leasing & Financial Services Ltd. The resulting credit squeeze has left builders such as Radius and Omkar Realtors & Developers Pvt. looking for support, or, like scandal-hit Housing Development & Infrastructure Ltd., filing for bankruptcy.

There are $63 billion (Rs 4.46 lakh crore) of stalled residential projects across the country, according to Anarock Property Consultants, and their developers have become locked in a downward spiral with shadow banks. As lenders stop new credit, builders are forced to offload properties. Prices fall, causing more real estate loans to turn sour, pushing more shadow banks toward default.

In turn, that has cast a shadow on traditional banks and dried up funding to other businesses, putting more stress on an already slowing economy.

For Radius, the crunch started when one of its main lenders, Dewan Housing Finance Corp., shut off new loans as it attempts to restructure some $12.7 billion (Rs 90 thousand crore) debt to avoid bankruptcy. Shah said he gained a temporary reprieve by selling a project to Blackstone Group Inc., but like all builders, his company needs cash to operate while projects are being built.

Edelweiss Financial Services Ltd. and Indiabulls Housing Finance Ltd., which have some of the largest exposures to the sector, are also tightening funding.

The risks of exposure to real estate were underlined by the scandal surrounding HDIL. The Reserve Bank of India abruptly imposed withdrawal curbs on a small cooperative bank that it said had under-reported loans to the developer. The decision triggered panic withdrawals from the bank, prompting the RBI to issue a statement to reassure the public that the banking system is “safe and stable.”

The stresses in the banking industry are an added headache for the RBI, which cut rates by 25 basis points on Friday to counter slowing growth.

Some commercial banks that lent to developers and shadow finance firms -- notably Yes Bank Ltd. -- have been caught up in the crisis. Banks had boosted overall lending to NBFCs by more than 50 per cent over the past five years, to about $96 billion (Rs 6.79 lakh crore) or nearly 8 per cent of their total exposure. Yes Bank shares have led the declines in bank stocks, dropping more than 80 per cent in the past six months, including a 12 per cent slump this week. Its proportion of stressed loans could rise to more than 12 per cent, from a net bad debt of 2.9 per cent, according to Credit Suisse Group AG analyst Ashish Gupta.

Yes Bank Chief Executive Officer Ravneet Gill said his bank only had exposure to three NBFCs. “There is a general perception that there is a closer linkage between Yes Bank and NBFCs than actually exists,” he said in an interview on Thursday.

“The biggest risk is, at its core, a liquidity crisis. A liquidity crisis left unattended balloons into a solvency crisis,” said former Reserve Bank of India Governor Duvvuri Subbarao, who steered India through the 2008 global downturn. While he doesn’t see any local bank going down in the current scenario, “some weak non-bank finance companies should be allowed to fail for the entire financial system to come out stronger,” he said. 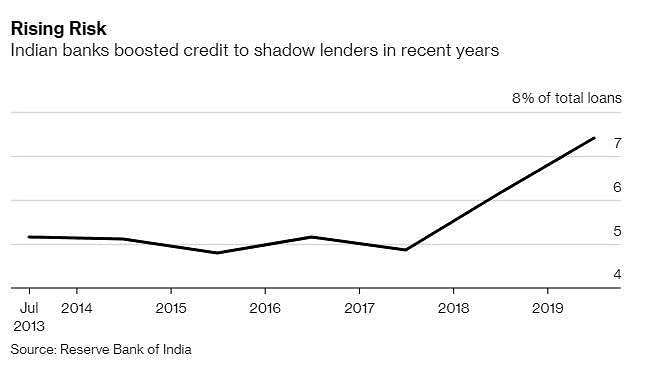 RBI Governor Shaktikanta Das reiterated on Friday that the central bank has the top shadow lenders under its “intense” supervision. He had said last month that the RBI is closely monitoring the top 50 NBFCs, which contribute about 75 per cent of the sector’s loans, and it won’t allow another systemically important NBFC to fail. He also assured that the RBI would not let any cooperative bank, a tiny lender chosen by scores of small individual depositors, collapse.

Meanwhile non-real estate borrowers are getting caught in the cross-fire. India’s shadow banks catered to a third of new lending until a year ago, and the tightening of new financing has hit businesses from tailors to automakers and affected some of the nation’s biggest business conglomerates, including Anil Ambani’s troubled group, Essel Group Ltd. and Coffee Day Enterprises Ltd.

Slowing property sales in a flagging economy make it even harder for many shadow lenders to get funding, including Clearwater-backed Altico Capital India Ltd., which defaulted on repayments last month.

“The Achilles heel for the real estate sector is weak sales velocity, which has a direct impact on cash flows,” said Saswata Guha, director of financial institutions at Fitch Ratings. “At some point it is bound to have a cascading effect if unresolved.”

About $24 billion of shadow bank loans to developers could sour in the coming two years, according to estimates from Anarock.

Roots of the Crisis

The crisis has its roots in a lending binge by shadow banks between 2013 and 2018. Commercial banks were trying to chip away at a mountain of bad loans to large infrastructure and energy projects, so shadow lenders moved in, doubling their loan total to $438 billion in four years.

Most of the new financing went to builders, home loans, and debt-laden infrastructure projects, according to rating company ICRA Ltd. In comparison, commercial banks’ lending rose just 46 per cent to $1.36 trillion during the period.

When IL&FS defaulted, the funds dried up, and risks on banks’ balance sheets started rising. Total bad loans could rise to a record 12 per cent by early next year, according to Credit Suisse and Fitch Ratings.

“A few months back we were essentially looking just at the real estate sector, but now the broader economic slowdown can affect other sectors and their creditworthiness,” said Fitch’s Guha.

But saving an NBFC from collapse would mean forcing a bank to absorb all or part of its bad debt. So while Das is leaning toward enforcing market discipline on NBFCs, borrowers like Radius are worried the crisis will continue.

“The reliance on NBFCs has heavily hit cash flows,” said Radius’ Shah, who hopes the measures taken by policy makers will help the sector. “The need for more money is acute.”

Now we are on Telegram too. Follow us for updates
TAGS
Real estate crisis shadow banks NBFC Debt crisis realty