Both e-commerce marketplaces started their festive sale on September 29 and is scheduled to end on Friday.

India’s largest e-commerce players Amazon and Flipkart have just concluded their festival season sales, but the war of claims on outreach and customer traction has just begun. Marketing firm Redseer Consulting estimates that the total sales of both e-tailers hit USD 3.7 billion during the week between September 28-October 4.Notwithstanding the apprehensions of the impact of the ongoing economic slowdown, Amazon and Flipkart have claimed record sales during the period with an increase in the number of both customers as well as sellers. 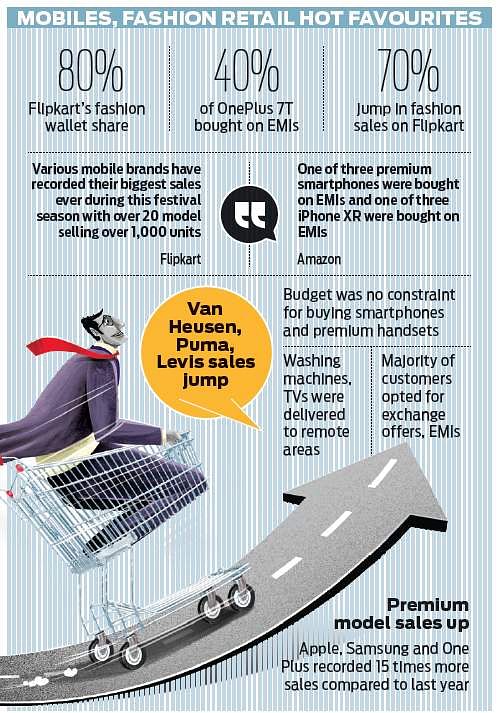 Flipkart said that its Big Billion Days (BBG) sale this year saw a 50 per cent increase in the number of customers compared to last year, while the number of sellers crossed 25,000 during the first two days of the sale. Amazon, for its part, has claimed that more than 65,000 sellers from over 500 cities participated in the sales. Both firms said that the majority of sellers and customers both came from smaller towns and non-metro cities.

Both e-commerce giants have also claimed a major share of the market during the sales season. Amazon, quoting the research agency Nielsen, said that it has captured the highest share of transacting customers and purchases across all online shopping platforms in the first 5 days of the Great Indian Festival period.

“The first wave of the Great Indian Festival was our biggest celebration ever with Amazon.in -- witnessing highest share of transacting customers and purchases across all marketplaces in India,”  Amit Agarwal, Senior Vice President and Country Head, Amazon India, said.

Walmart-owned Flipkart has claimed that meanwhile that it was able to capture 70 per cent of the market share among all e-commerce sellers, with its wallet share rising to 80 per cent in the fashion segment. The launch of hindi interfaces on both platforms also proved useful in attracting more customers from the smaller towns.

“It has been a fantastic start to the festive season. We set out with an aim to bridge the gap between India and Bharat. Whether it is the uptake of the Hindi interface or the adoption of our affordability constructs, engagement constructs like gaming, consumers have engaged with brands they love like never before,” said Kalyan Krishnamurthy, CEO, Flipkart.

Mobile phones, large appliances and fashion retail were among the most sold categories during the period. Flipkart claimed that various mobile phone brands claimed the biggest ever sales this season with more than 20 models selling over 1,000 units during the five-day period.

Amazon, meanwhile, has claimed that budgets did not stifle mobile phone sales, with premium handsets like Apple, Samsung, One Plus and Xiaomi witnessing a 15-fold growth in sales compared to last year. "One out of three premium smartphones were bought on EMIs," Amazon said in a statement.

Now we are on Telegram too. Follow us for updates
TAGS
Amazon Flipkart SHOPPING