According to the company’s officials, the Avadh acquisition is already resulting in synergies and will help break into the highly lucrative Gujarat market.

Prataap Snacks, which sells a wide range of packaged foods under the Yellow Diamond brand, is banking on an expanded sweet snacks portfolio and the recent acquisition of Gujarat-based Avadh Snacks to give a fillip to its earnings. Gujarat, which is the second largest snacks market in India with the highest per capita consumption, is largely dominated by small, unorganised players.

According to the company’s officials, the Avadh acquisition is already resulting in synergies and will help break into the highly lucrative Gujarat market. “The acquisition helps us deepen our presence in the key Gujarat market. None of the national players have been able to make a mark in this market yet. But, Avadh will aid us in distribution synergies across Gujarat and neighbouring markets,” officials said during an investor presentation. 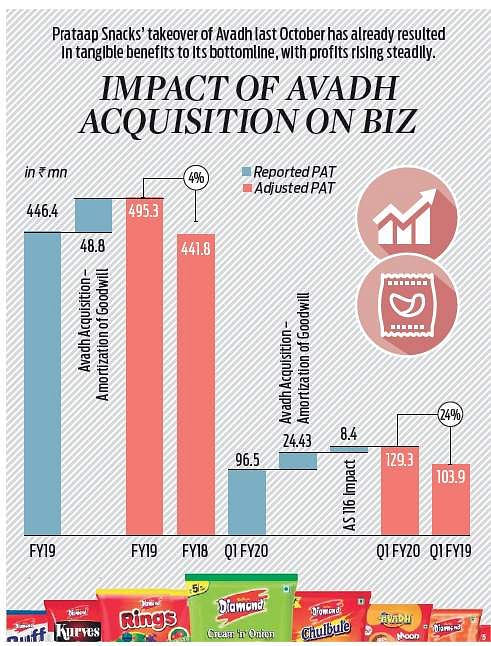 Prataap had acquired an 80 per cent equity stake in Avadh last October for Rs 148 crore. Avadh is currently the fastest growing snacks player in Gujarat with a 6 per cent market share and a compounded annual growth rate (CAGR) of 25.1 per cent over the past three years. To serve its increasing markets, Prataap is planning to increase capacity in Avadh’s Rajkot facility by 50 per cent by the end of this month.

This comes on top of a sustained expansion in capacities the company has undertaken over the past few years. “Prataap has nearly trebled its manufacturing base over past two years, with 14 facilities now.... which is expected to help cater to a larger market at reduced logistics cost,” said JM Financial analysts Vicky Punjabi, Nikita Maheshwari and Richard Liu.

According to the company, the Yellow Diamond range and Avadh’s products are complementary and will help in its plans to market Avadh’s pellet-based snacks pan-India by using Yellow Diamond’s manufacturing and distribution network. Prataap is also working on widening its portfolio of sweet snacks, where it recently launched cupcakes.  “We will be launching Tiffin Cakes and Layer Cakes in the second half of FY20,” the company said.

An increased contribution from the sweet snacks category will also help the company’s profit margins. “Sweet snacks portfolio contributed 2 per cent of turnover in FY19 which the management intends to enhance to 10 per cent through new product launches and distribution expansion.

It has a better gross margin profile and also entails lower distribution costs which helps deliver a superior return on investment,” said the report, due to lower freight costs and less volatile raw materials.The `5 category of snacks will also continue to be of particular importance to the company. “It contributes more than 50 per cent of the organised market. Conversion from unorganised to organised also happens at this price point,” the company noted

Now we are on Telegram too. Follow us for updates
TAGS
Prataap Snacks Yellow Diamond brand Avadh Snacks