The company gave no reason for the sudden move, only saying that chief financial officer Clotilde Delbos would take over temporarily as it searches for a new CEO.

PARIS: French automaker Renault said Friday that it had dismissed its chief executive Thierry Bollore, just nine months after he was named in the wake of the arrest of the previous boss, Carlos Ghosn, on charges of financial misconduct.

The company gave no reason for the sudden move, only saying that chief financial officer Mrs Clotilde Delbos would take over temporarily as it searches for a new CEO. In an exceptional board meeting earlier Friday "the Board of Directors decided to end the mandate of Mr Thierry Bollore as chief executive officer of Renault with immediate effect," it said in a terse statement. 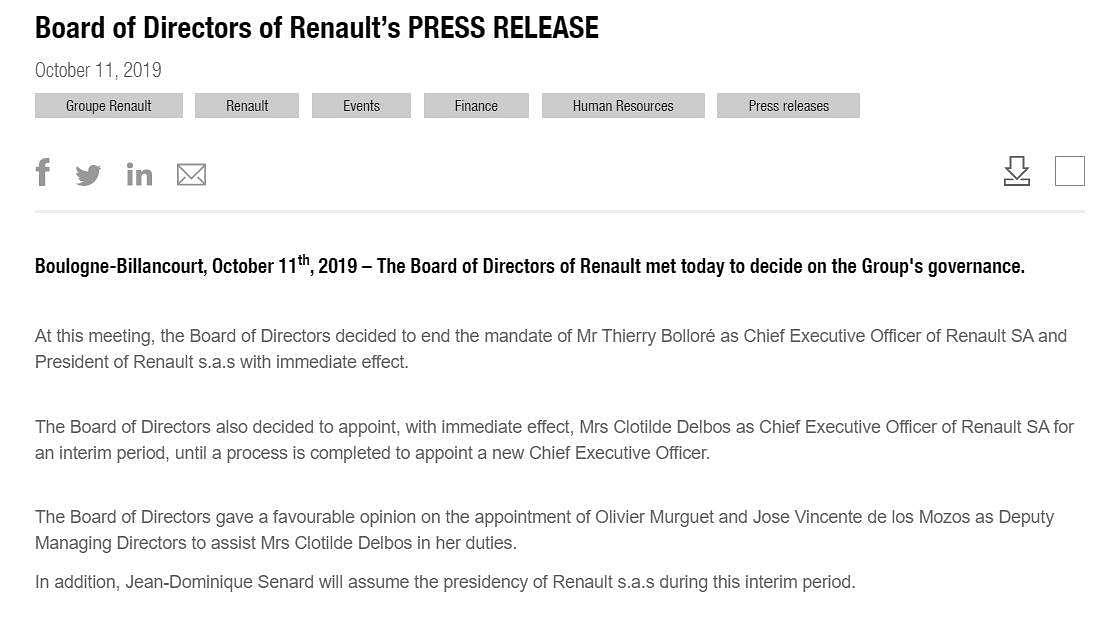 Bollore's departure had been speculated on since French daily Le Figaro reported on its website late Tuesday that he had a difficult relationship with board chairman Jean-Dominique Senard.

Bollore, a 56-year-old with long experience in the auto industry, had been named deputy CEO in February 2018 by Ghosn, whom he was widely expected to succeed.

But Ghosn's shock arrest in November 2018 in Tokyo on charges of under-reporting his salary as head of Renault's alliance partner Nissan plunged both companies into turmoil, prompting deep revamps of their management structures.

Bollore, however, said in an interview published Friday that he was blindsided by his ouster. "The brutality and the totally unexpectedness of what is happening is stunning," Bollore told financial daily Les Echos.

"I got in a plane in Tokyo on Tuesday night when I landed in Paris on Wednesday morning, I saw in the press that Jean-Dominique Senard, who up to now always said there wasn't a hair's breadth between us, wanted my departure," he said.

"I have always been loyal to him," he added, while calling on the French state, which owns 15 percent of the firm, to ensure "good governance" so as not to "destabilise Renault." Bollore was named CEO last January and Senard was brought in from the tiremaker Michelin as board chairman, tasked with stabilising Renault and its alliance with Nissan and Mitsubishi in the wake of Ghosn's arrest.

Renault said Senard would hold a press conference at Renault's headquarters outside Paris at 12:30 pm (1030 GMT).

Now we are on Telegram too. Follow us for updates
TAGS
Renault Thierry Bollore Chief Executive Officer CEO