The total value of Sino Biopharmaceutical’s shares held by the family is around $8.5 billion, Bloomberg calculations show.

Sino Biopharmaceutical Ltd.’s billionaire founder and his wife are transferring about one-fifth of the company’s share capital, or around $3.8 billion (Rs 2.69 lakh crore), to their son -- as a gift.

The grant of 2.7 billion shares, detailed in a Hong Kong exchange filing late Tuesday, makes Eric Tse one of Asia’s richest individuals overnight. (There’s no tax on gifts or inherited wealth in the former British colony.) But the 24-year-old son of Tse Ping and Cheng Cheung Ling says he’ll try to keep a low profile.

According to the statement, Eric has “indicated that in response to nomination for Billionaire List or wealth ranking organized by media or other organizations, he will endeavour not to participate in such rankings in his own name, and would recommend participating in such nominations in the name of the Tse Ping family.” 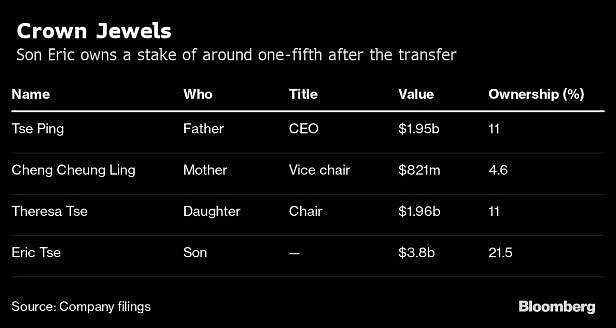 Outside of his parents, that includes older sister Theresa. The total value of Sino Biopharmaceutical’s shares held by the four is around $8.5 billion, Bloomberg calculations show.

The share transfer is the latest in the tsunami of Asian wealth that’s being passed down to the next generation. In 2018, four Chinese tycoons tipped more than $17 billion into family trusts, while many of Hong Kong’s biggest developers are going through succession planning.

After graduating with a finance degree from The Wharton School of the University of Pennsylvania, Eric went on to become a Schwarzman Scholar at Beijing’s Tsinghua University, according to an article on Wharton’s website.

The piece also says Eric was born in Seattle, attended primary school in Beijing and secondary school in Hong Kong. He established the China Summit Foundation, a charitable organization that supports education and cultural initiatives, it adds.

The scion is also active on Instagram, where he shares shots of himself parasailing and partying with Rihanna. Other selfie mates include model Bella Hadid, basketball star Yao Ming and Princess Charlene of Monaco. His most-recent post is from Beijing, where he attended the 70th anniversary of the People’s Republic of China.

He appears as a director on at least five other company boards in Hong Kong, including Charoen Pokphand Skyland Group Ltd., a firm that uses the name of the conglomerate of Thailand’s richest family.

Tse Ping, who’s been a national committee member of the Chinese People’s Political Consultative Conference, the nation’s top political advisory body, will remain as president of Sino Biopharmaceutical after the share transfer. Its purpose is to refine the management and inheritance of the family’s wealth, according to the statement.

Now we are on Telegram too. Follow us for updates
TAGS
Sino Biopharmaceutical Hong Kong Eric Tse Cheng Cheung Ling