The buzz was on imposing a gold holding cap on individuals, allowing them to declare the excess volume and pay tax to get amnesty.

NEW DELHI: Speculation over a gold amnesty scheme amid a recent spike in smuggling kept markets agog on Wednesday, but the government saw no merit in it. The buzz was on imposing a gold holding cap on individuals, allowing them to declare the excess volume and pay tax to get amnesty.

But finance ministry officials called it impractical, adding a sudden announcement of a threshold limit would be arbitrary. “This is not practically possible. The idea was mooted by NITI Aayog long ago and was dismissed by the then finance minister (Jaitley),” an official said. 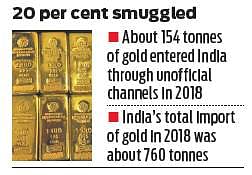 However, the government is considering taking strict measures to curb smuggling and hoarding, as recent weeks have seen a steep hike in gold smuggling cases.

“There had been steep rise in gold smuggling. Both the custom and income tax departments have been actively busting several rackets but more policy reforms are required. The government is considering ways to check gold hoarding,” a senior official from the finance ministry told.

Officials said they were also looking at ways to get temples, institutions and people to recycle their hoarded gold so that there was sufficient supply within the country.

Now we are on Telegram too. Follow us for updates
TAGS
gold amnesty gold smuggling gold hoarding