Incubators get a shot in arm

A longside a host of big-bang tax reforms, Union finance minister Nirmala Sitharaman also provided a fillip to the start-up and innovation sector on Friday by widening the scope of mandated CSR expenditure to a much larger segment of public sector start-up incubators.

Until now, companies were allowed to provide Corporate Social Responsibility (CSR) funds only to technology incubators located within the Centre-approved academic institutions.

“Now, Corporate Social Responsibility fund can be spent on incubators funded by Central or state governments, any agency or PSU, and making contributions to public-funded universities, IITs, national laboratories and autonomous bodies engaged in conducting research in science, technology, engineering and medicine aimed at promoting SDGs (sustainable development goals),” a government statement said.
The move is expected to open up a substantial corpus of funds for state-sponsored incubators and start-ups currently being mentored by them across the spectrum, from small university-funded entities to much larger start-up accelerators like the Techno Hub in Jaipur, T-Hub in Telangana and the Technology Innovation Zone in Kerala. “We’re focused on making India the Innovation Laboratory of the world…

This will boost research in various sectors,” tweeted Anurag Thakur, Minister of State for Finance.
According to the Companies Act, firms with a net worth of Rs 500 crore or more; a turnover of Rs 1,000 crore or more, or a net profit of Rs 5 crore or more, are required to spend 2 per cent of the average net profit of the three preceding years on CSR activities. This has seen spending on CSR steadily increasing since the mandate began, with total CSR expenditure by over 10,000 Indian companies rising from Rs 10,066 crore in 2014-15 to Rs 13,327 crore in 2017-18.

However, CSR spending has generally gone to other segments than start-up incubators. For instance, CSR spending between 2014-15 and 2017-18 was the highest in education, health, fight against poverty and malnutrition, access to clean drinking water, and livelihood for the differently abled. According to a Lok Sabha reply filed by the corporate affairs ministry, less than Rs 37 crore of CSR monies had been invested in technology incubators out of a total CSR spending of Rs 7,860 crore in 2016-17.

“Earlier too, many such incubators were getting funded, but only on the technology side. With the scope now widened to all public sector funded incubators, a lot of start-ups will get a leg up,” said an assistant manager at an IIT-funded tech incubator. “Expansion of scope of CSR expenditure will also encourage research and development in automotive industry,” added ACMA president Deepak Jain. 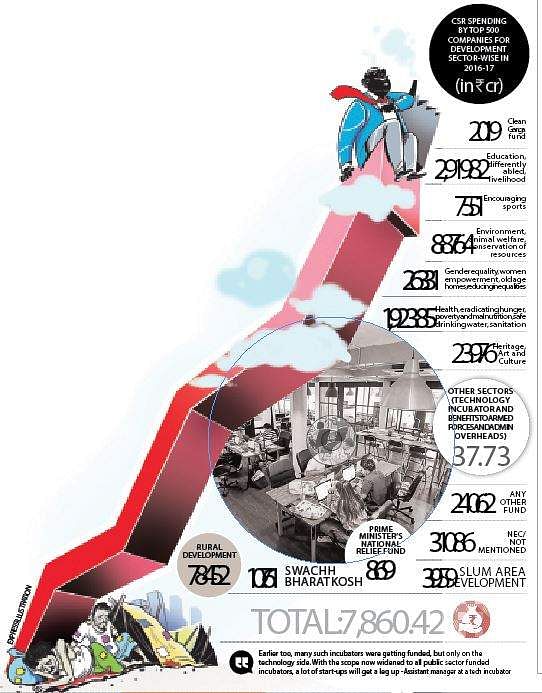 Stay up to date on all the latest Business news with The New Indian Express App. Download now
(Get the news that matters from New Indian Express on WhatsApp. Click this link and hit 'Click to Subscribe'. Follow the instructions after that.)

SC to conclude hearing on women's entry to Sabarimala temple, mosques in 10 days