Japanese consumer electronics major Sansui is making a fresh attempt to crack the Indian consumer durables market with a new set of products.

According to officials, it aims to double its turnover to around Rs 3,500 crore by 2022, given that the brand already has a robust brand recall in India, with its exit lasting for just three months. At its peak in 2016, Sansui clocked an India turnover of Rs 1,627 crore.

The Sansui brand had been licensed to Videocon earlier but had shut shop earlier this year after the agreement with the embattled firm fell through.

“With digitalisation seeing strong growth and the government investing heavily in rural electrification, the demand for large appliances will grow rapidly.

Sansui, with its aggressive pricing model, is confident of growing its market share in India to 15 per cent by FY22,” said Abhishek Garg, executive director Jaina Group and brand head, Sansui India. 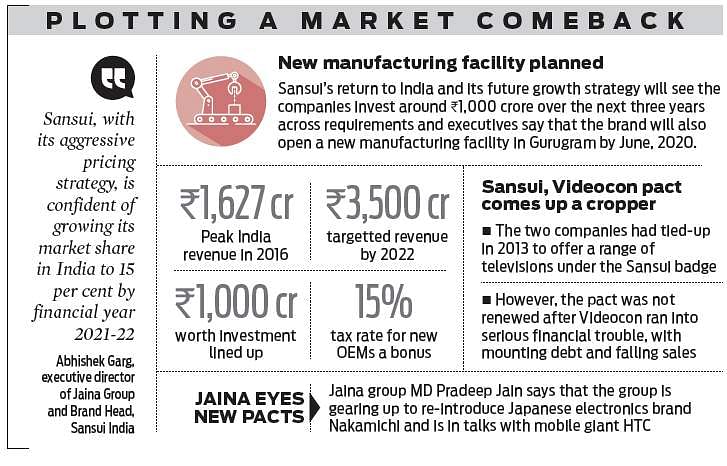 The company also plans to invest Rs 1,000 crore over the next three years and will set up a new manufacturing plant in Gurugram by June 2020.

“The new facility will serve as a key manufacturing hub for Sansui in South-east Asian markets,” Garg added. The move is also in line with the government’s mega booster dose of corporate tax rate cut to 15 per cent (effective rate 17.01 per cent) for new manufacturing firms.

Jaina group MD Pradeep Jain also said that it is in talks with Taiwan’s smartphone brand HTC and is gearing up to re-introduce Japanese electronics brand Nakamichi.

“Nakamichi will be more high-end in its approach, focusing on premium appliances and electronics products. Their products are likely to hit the stores in December this year,” he added.

In the past, Jaina Group has worked with global brands in the country including HTC, Motorola, Samsung, Siemens, Philips and Panasonic.

Stay up to date on all the latest Business news with The New Indian Express App. Download now
(Get the news that matters from New Indian Express on WhatsApp. Click this link and hit 'Click to Subscribe'. Follow the instructions after that.)
TAGS
Sansui Karbonn Mobiles Jaina Group