Aggressively selling its family silver such as state-run banks, public enterprises and insurance companies, and/or borrowing like never before seem to be its only options.

NEW DELHI:  The Government is near broke. At a time when policy makers and analysts are urging a step up in spending to rescue an economy which has been shrinking ever since Covid hit Indian shores, the exchequer is staring at a massive shortfall in its earnings.

Like most households in India, it will find its budget deeply in the red by the end of the year unless it manages to pull out rabbits out of its hat—not only to cover its planned expenditure, but to also finance the economic revival package that it knows it must come up with to save the country from a deepening recession. 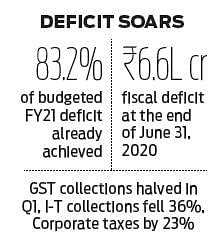 Aggressively selling its family silver such as state-run banks, public enterprises and insurance companies, and/or borrowing like never before seem to be its only options.

The Centre’s financial report card till now looks pathetic—its fiscal deficit, the difference between income and spending, at the end of the June quarter stood at an all time high of Rs 6.6 lakh crore. Or 83.2 per cent of the budgeted deficit for the whole year.

The fiscal deficit target of 3.5 per cent of the GDP for the year is likely to nearly double, according to many, given the huge revenue slippages expected and the fact that GDP will be shrinking rather than expanding as was believed when the budget was made.

Tax revenues too have shrunk alongside the economy. Taxes from goods and services halved in the June quarter compared to the same period last year, income tax collections fell 36 per cent and corporate taxes came in 23 per cent lower.

As a result, the Government’s borrowings for the year will go up by more than a third to an unprecedented Rs 12 lakh crore. More may be needed to plug the income-expenses gap.

All this mean’s India’s debt is rising. Debt as a percentage of GDP stood at 72.2 per cent in the financial year gone by. More borrowings and a smaller GDP is expected to push this to 87.6 per cent, according to the SBI Ecowrap report.

A figure which would ring alarm bells among potential investors given that it is far higher than India’s Asian competitors. Vietnam has a debt to GDP ratio of 54.3 per cent as of December last year, and Indonesia a mere 33.8 per cent which could go up to 35.8 per cent by this December.

Though almost the entirety of India’s debt comprises bonds sold within the country, which means repayments are in rupees and not dollars (the USD has been constantly appreciating), a 87-88 per cent debt to GDP ratio is clearly a heavy cross to bear.

Taking on more loans to pay for a stimulus package may represent quite a dilemma for a state anxious to be seen as prudent by investors, especially from across the seas. One of the few remaining alternatives may be an aggressive sale of family silver.

Says M Govinda Rao, former Member of the PM’s Advisory Council, “instead of recapitalising PSU banks, the government should sell stakes aggressively. Committee after Committee have recommended this...

Keep 30 per cent and sell the rest.” Officials in North Bloc say they may not go down to 30 per cent but an aggressive PSU stake sale could be on the cards, such as in insurance giant LIC and state-run banks, taking advantage of the fair returns in securities.

However, the stock market—which has rallied some 46 per cent since the lockdown was announced—may not remain buoyant for ever, and the hard reality of a flailing economy may well yank it down before India’s elephantine economic bureaucracy actually gets down to business.

More from Business.
Now we are on Telegram too. Follow us for updates
TAGS
tax revenue Indian economy COVID 19