NEW DELHI:  Public sector banks would need to raise as much as Rs 2.1 lakh crore crore in external capital over the next two years in order to absorb rising credit cost and create buffers for growth—even though they have received a breather by way of a resolution framework for Covid-related stress, said Moody’s Investor Services. 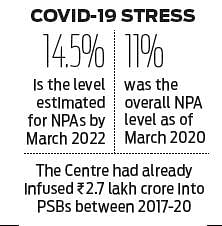 The ratings agency added in its statement on Friday that the sharp slowdown in India’s economic growth, exacerbated by the coronavirus outbreak, will see asset quality of PSBs deteriorating, with a substantial share of restructured loans slipping into the non-performing loans (NPL) category.

“PSBs are facing large capital shortfalls fresh on the heels of a capital infusion totaling Rs 2.7 lakh crore the government made during fiscal 2017-20 to restore their solvency that had been damaged by large increases in NPLs in prior years.

We estimate these banks will need about Rs 1.9-2.1 lakh crore over the next two years and the most likely source of capital to plug the capital shortfalls will be government support,” it said in a note. While a large number of private banks have already undertaken capital raising, their public counterparts are yet to do so.

Of the total amount, PSBs will need about Rs 1 lakh crore to build loan-loss provisions to about 70 per cent of NPLs, which will leave them with enough capacity to grow loans 8-10 per cent annually, faster than the 4 per cent in fiscal  year 2019-20.

It also expects that Retail and SME-focused banks with weak loan-loss coverage and capitalisation will face greater external capital requirements than corporate-focused banks.“Job losses resulting from disruptions to economic activity and subsequent reductions in household income will lead to a deterioration of retail loan quality. Performance of MSME loans has started weakening,” Moody’s added.