According to brokerages, this is the largest such contraction in recent memory.

NEW DELHI:  With the keenly watched first-quarter results season drawing to a close, it has become clear that the vast majority of India’s largest companies turned to aggressive cost-cutting to mitigate the pandemic’s impact on their profits. The shrinkage in revenues and sales during the April-June 2020 period has still been massive, with Nifty50 revenues tanking 29.4 percent year-on-year and net profits by 25.5 percent.

According to brokerages, this is the largest such contraction in recent memory. But the overall performance has been a little better than expected— primarily due to the aforementioned cut cutting. “Cost control and cash preservation were effectively deployed as tools to offset the headwinds from the lockdown induced volume declines,” noted analysts at Motilal Oswal Financial Services in a Q1 review this week. 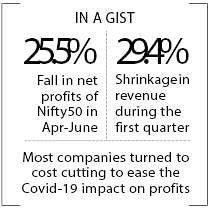 But 26 firms in the index recorded a decrease in profits, even though companies narrowed their focus on large scale cost cutting during the period. Bearing the brunt of the impact were sectors such as Autos, Metas and a few heavyweights such as Tata Consultancy Services, Reliance Industries and ITC. The telecom sector, despite being one of the few to dodge any direct pandemic fallout, posted more record losses due to liabilities arising from the AGR case.

Companies may have limited the fallout on profits, but sales contractions across the board show that a long period of sluggish demand confronts the Indian economy. According to Credit Suisse, in other economies, revenues fell far less, but operating profits declined far more than India. This shows a sharp drop in costs for India’s largest 100 companies, with the agency noting that such a low operating leverage may portend a prolonged slowdown.

Now we are on Telegram too. Follow us for updates
TAGS
India Inc India Inc cost cuts