Indian economy in shambles? Citizens not happy with government's handling of situation

People who have been affected, and those who fear they are next in line, are not happy with the government’s handling of the situation.

NEW DELHI: Stories of economic slowdowns are usually told in terms of cold, clinical statistics; in graph after graph of squiggly lines and staid bar charts. But, these do little justice to what a slowdown actually means for the millions who live through it: lost jobs, tightened belts, wiped out savings and mounting anxiety. The year 2019 has been one for such stories. Automobile sales growth hit a two-decade low, industrial output contracted for successive months, revenue collections tanked and factories laid off thousands.

One of those who lost their livelihoods to a tanking economy is R Nageswara, the sole breadwinner of a family raising two children and nursing a feeble grandparent. “I used to earn Rs 15,000-18,000 a month. But, I lost my job as the owner was finding it hard to run his business,” he says.

For many of Chennai’s small auto component manufacturers, like the one Nageswara worked in, the auto sector slowdown has been costly. And little opportunity remains for alternative sources of employment. “I am looking for a job, but the industry is in such a bad shape that nobody is hiring. I have no savings also,” the father of two says. 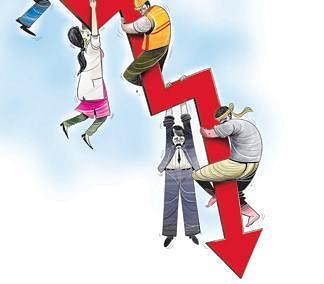 Nageswara is just one among thousands who have seen their livelihoods snatched away by a tanking economy. The worst affected are labourers, says A Soundararajan, Tamil Nadu state president of the Centre of Indian Trade Unions (CITU). “Over the last few months, over 1 lakh labourers in and around Chennai have lost their jobs,” he says.

Private economic research firm CMIE estimates that 7.6 per cent of India’s populace was unemployed as on December 23, 2019, with urban unemployment at 9.32 per cent. The fallout has not been limited to only the most vulnerable. S Ananda, a highly paid IT professional, was also laid off recently. “I have taken a Rs 25 lakh housing loan, I don’t know how I will repay it,” he worries. “I have managed for now by borrowing from friends and family, but I don’t know when I will get a new job. Every company is on a cost-cutting spree.”

For small business owners, the last few quarters have been a period of struggle. “My business (small transporter) has been severely impacted… It has forced me to sell half of my commercial vehicles,” says Manish Kumar from West Bengal.

“Sometimes, our fleet of vehicles has remained unused for weeks. We haven’t experienced this kind of a dull phase… We are technically not even able to pay EMIs,” he adds. Kumar points out that he has already asked his drivers to look for alternative employment and if the situation does not improve, he “will have to start looking for alternative businesses”.

SK Mandal, an auto spare parts wholesaler in Delhi says he needs at least Rs 20-30 lakh in working capital to run his business; however, with retailers unable to pay him back for the goods he has shipped, he is not able to pay back his bankers the previous working capital loans. “I am paying in driblets to avoid them using the debt recovery tribunal against me.” Bad loans run up by Micro, Small and Medium Enterprises (MSME) have increased by 20.7 per cent in the second quarter of this year.

People who have been affected, and those who fear they are next in line, are not happy with the government’s handling of the situation. “They came to power with extremely benign conditions, yet rather than build on it, just as the economy was starting to grow, (PM) Modi introduced demonetisation and a badly designed Goods and Services Tax,” says Nikhil, a systems engineer at TCS.

A few with experience walking the corridors of power say much of the slowdown is caused by fear in the industry. “Fast-track clearances, by effectively reviving the Project Monitoring Group that was set up a few years ago and simplify processes. There are other fiscal and monetary measures required to generate demand,” says Anil Swarup, former school education secretary in the Government of Maharashtra and founder chairman, Nexus for Good. “But, the first step would be to accept the state of affairs and not blame everything on external factors”.

Now we are on Telegram too. Follow us for updates
TAGS
Indian economy India economy 2019 India slow economic growth