Vodafone Idea exit or not, Jio is India’s largest telco

BSNL has maintained its momentum from the previous few months when it had been the only telco other than Jio to add its total mobile user base.

Telecom sector experts have spent the past week highlighting the possibility of a bonanza for Reliance Jio and Bharti Airtel in the instance of a Vodafone Idea exit, but the Mukesh Ambani-led telco has already snatched the title of India’s largest telecom service provider from its beleaguered rival. The latest wireless subscriber data released by the Telecom Regulatory Authority of India (TRAI) for November 2019 shows that Jio now has the largest number of mobile subscribers — a position held by Vodafone Idea (VIL) ever since the merger of Vodafone India and Idea Cellular in August 2018. 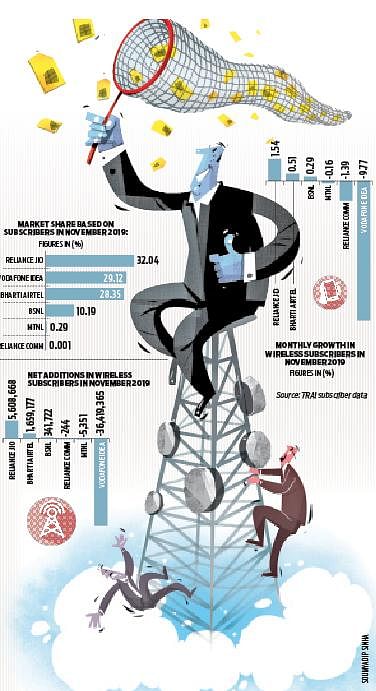 Jio had become India’s largest telco in terms of revenue market share several months earlier and is already one of Reliance Industries’ most profitable enterprises. For the third quarter, Reliance Jio Infocomm reported a 62.5 per cent year-on-year rise in net profit to `1,350 crore.

According to TRAI, Jio ended November 2019 with 369.93 million subscribers and a 32.04 per cent subscriber market share. It continued to add a steady stream of users to its rolls during the month, boasting net subscriber additions of 5.6 million compared to the previous month.

VIL, on the other hand, continued to bleed customers. The company lost a net of 36.4 million subscribers in November, bringing its total user base down to 336.26 million or 29.12 per cent of the market. Except for October 2019, VIL has lost net subscribers during every single month since its merger. In October 2019, VIL had held a subscriber market share of 31.49 per cent while Jio held just 30.79 per cent.

Following suit is Bharti Airtel, which has managed to do much better than its fellow incumbent in the face of the Jio onslaught. Airtel has begun expanding its user base after Jio’s initial launch and in November 2019, the company maintained its momentum. Airtel finished the month with 28.35 per cent subscriber market share and 327.3 million users, adding a net of 1.65 million users.

BSNL has also maintained its momentum from the previous few months when it had been the only telco other than Jio to add its total mobile user base. BSNL finished the month with 117.59 million users, up by a net 338,480 users.

VIL’s potential exit due to an inability to pay Supreme Court-mandated statutory dues could turn into a welcome gift to Reliance Jio. While analysts expect both Airtel and Jio to benefit, the Mukesh Ambani firm is expected to snap up 70 per cent of VIL subscribers.

Now we are on Telegram too. Follow us for updates
TAGS
Vodafone Idea Jio