As start-ups grow and begin to have a global footprint, one sees a steady increase in founders wanting to externalize/ flip their structure.

By Pawan Jhabakh and Palaniappan A

India is one of the fastest-growing startup destinations and is touted to be the second-largest startup ecosystem in the world. With greater focus from the government, better incubation support and improved access to funding, the number of startups being formed is on the rise.

As startups grow and begin to have a global footprint, one sees a steady increase in founders wanting to externalize/flip their structure (i.e) have their holding company in countries like Singapore, US, UK, Netherlands, etc. Externalization/ flipping of the structure essentially means flipping the holding company of the startup outside India. 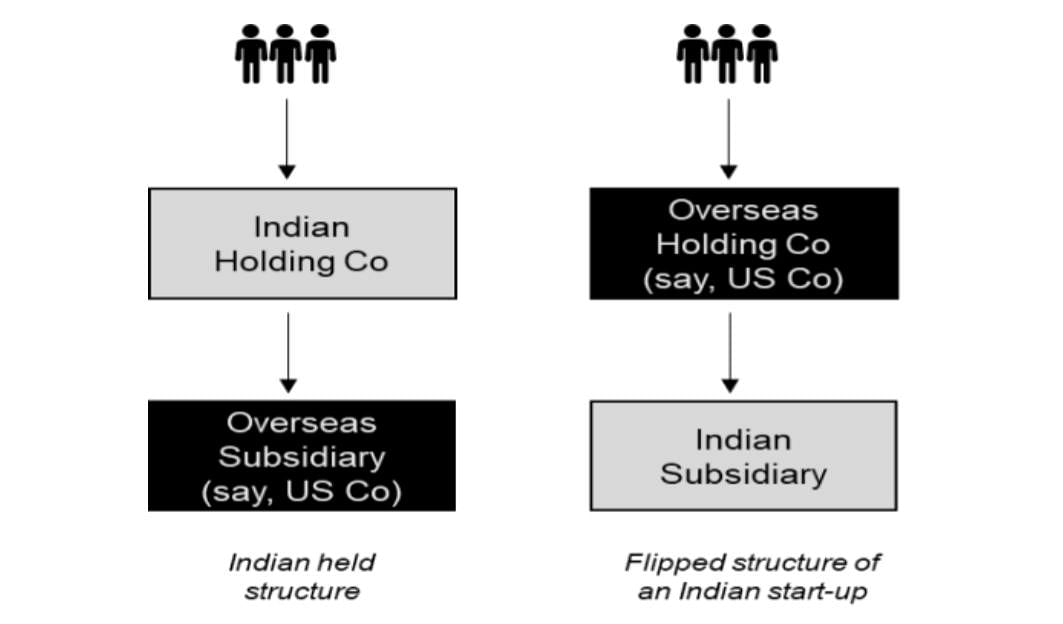 Typically, the reasons for externalization are easier access to funding, stable regulations, the familiarity of the structure for Private Equity investors, and a conducive platform for public listing in overseas jurisdictions.

While multiple options are available to externalize a structure ranging from plain vanilla share transfers, share swaps to outbound mergers/ other internal restructuring exercises with multiple steps, the key lies in timing the externalization right post factoring some red flags.

Some of the key considerations are discussed here:

1) Round tripping and other restrictions under the Foreign Exchange Management Act, 1999 (FEMA)

Round tripping refers to the flow of funds from India to overseas which in turn is invested back into India. The issue of round-tripping in an externalized structure arises when some of the founders remain Indian residents.

While round-tripping is not expressly defined, the restriction has inherently been there under the regulations on overseas direct investment by Indian residents. The RBI updated its FAQs in 2019 and specifically clarified that it does not permit an Indian resident to set up an Indian subsidiary through its overseas company or acquire an overseas company that already has direct/indirect investment in India under the automatic route – a specific approval is required from the RBI in those cases.

In summary, if the founders of the startup are based outside India, the issue of round-tripping may not arise. On the contrary, if some of the founders are based in India, then the restrictions on round-tripping, the possibility of getting an approval from the RBI, alternative options like ESOPs/ phantom stocks would need consideration.

Startups in their early stages would have developed their IPs in India which is undoubtedly the most precious asset. A protective IP environment is quintessential for the entire startup ecosystem which is immense for value creation and growth of business. Various legislations are prevalent to protect and leverage the intellectual property created by startups, which are in the nature of: (a) Patents, (b) Copyrights, (c) Trademarks, (d) Designs, and (e) Trade Secrets. India has complied with its obligations under the Agreement on Trade-Related Intellectual Property Rights (“TRIPS”) to align itself with global IPR jurisdictions. The Budget 2020 referred to improved protection for Intellectual Property Rights through a dedicated policy. The Indian income-tax law also has a Patent Box Regime providing incentivized tax rate on royalty income earned from patents developed in India.

In some cases, the founders prefer to transfer the IPs to overseas companies from an IP protection, control and valuation standpoint. Transfer of IP to an overseas company is permitted under FEMA subject to certain conditions which inter-alia includes the requirement to transfer the IP at fair market value – nonadherence to the fair market value would be viewed as shifting value outside India triggering RBI scrutiny. The valuation of IP especially in startups is very dynamic and could significantly vary in a bootstrapped stage vs a seed funding stage vs a mature stage. Further, the gains on transfer of IP would also be subject to income-tax in India and would need to be at fair market value from a transfer pricing standpoint.

Given the same, the need for transfer of the IP to an overseas jurisdiction, the timing of the transfer and the basis of valuation of such IP assumes significance.

3) Tax costs on transfer of shares

In case of any restructuring involving transfer of shares/ assets, income-tax may become payable subject to certain conditions. Income-tax in such scenarios would typically be based on the fair market value of the assets being transferred.

Hence, in cases where the externalization is planned after multiple rounds of funding or closer to an exit, there could be significant accretion to the fair market value of such start-ups triggering substantial tax costs. On the other hand, flipping the structure at the initial stages would be tax optimal but would result in numerous regulatory/ compliance hassles. Hence, timing the flip at the right time becomes a critical decision point.

4) Regulations on place of effective management

Under the Indian income-tax laws, an overseas company could be regarded as an Indian resident and its global profits could be subject to income-tax in India if the place of effective management (POEM) of such company is in India – this is subject to satisfaction of certain revenue thresholds. Hence, if some of the key founders of the startup remain Indian residents, then the need to flip the structure requires a closer look having regard to the POEM regulations.

In summary, externalization of a structure is not a one-size-fits-all approach and need not necessarily be a move in the right direction for all start-ups. The business model of certain start-ups and their growth strategies may necessitate a flip in structure and the benefits may outweigh the complexities and the costs of such externalization. On the other side, the ethos of certain businesses, their positioning in the market, their access to funding and personal aspirations of the founders may not require an externalization. Also, the recent developments directed towards permitting Indian companies to list in foreign stock exchanges is a welcome measure and would provide better access to global capital without the need of having an overseas entity. At the end of the day, a business structure would need to necessarily facilitate growth of the business and can never be an impediment. It is therefore important to have a bespoke structure that would be the right fit for each organization.

Now we are on Telegram too. Follow us for updates
TAGS
Startups startup RBI Reserve Bank of India