Abu Dhabi based Mubadala to invest USD 1.2 billion in Jio for 1.85 per cent stake

The latest deal is the sixth since April which values Jio platforms at an equity value of Rs 4.91 lakh crore and an enterprise value of Rs 5.16 lakh crore.

BENGALURU: Abu Dhabi’s second largest investor group Mubadala will invest $1.2 billion (Rs 9,093.6 crore) in Reliance’s Jio platforms for a 1.85 per cent stake, taking the total investments in the Mukesh Ambani venture to Rs 87,655.35 ($11.5 billion) for a combined 19 per cent stake in the digital unit. The latest deal, the sixth since April, values Jio Platforms at an equity value of Rs 4.91 lakh crore and an enterprise value of Rs 5.16 lakh crore. 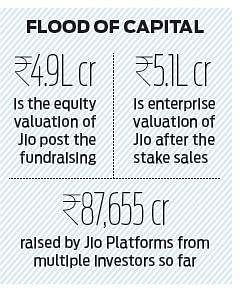 Ambani had earlier indicated that his focus will now be on aggressively growing the digital commerce unit--Jio--which also houses units operating is several segments like entertainment and telecom, which now have a combined subscriber base of over 300 million. Ambani’s ability to attract investments from five major American firms and now an Abu Dhabi investment major is being seen as a tactical move to prepare for Jio’s listing in global markets in a year.

Abu Dhabi-based Mubadala set up its venture arm in 2017 and has invested across various sectors with a focus on technology, such as cognitive computing, ICT infrastructure, telecom and satellite operations across US, Europe and Middle East.

Ambani had earlier said that he is aiming to reduce his company’s net debt to zero by March 2021 through the stake sales in Jio as well as RIL’s Rs 53,215 crore rights issue.

Now we are on Telegram too. Follow us for updates
TAGS
Mubadala Jio Mubadala Jio investment