This is causing delays in consignment clearance. The FIEO has taken up the matter with the ministry of commerce and industry.

NEW DELHI:  With the spike in bilateral border tensions spilling over to trade, shipments of Indian origin are being held up in Hong Kong and China in retaliation to the India blocking China-origin shipments at domestic ports. S K Saraf, president of the Federation of Indian Export Organisations (FIEO), revealed the tit-for-tat action by Beijing after reports of Indian customs holding back Chinese consignments.

This is causing delays in consignment clearance. The FIEO has taken up the matter with the ministry of commerce and industry. “We have been given to understand that customs is physically examining all imports from China, which is delaying clearance, adding to the cost of imports,” Saraf said in a letter to Commerce Secretary Anup Wadhawan. He said some exporters have reported retaliatory blocking by Hong Kong and Chinese customs.

Earlier, after consignments of Apple’s iPhone from China were held at various Indian ports, the US-India Strategic Partnership Forum wrote to the government sharing its concern. It said the Director General of Foreign Trade and customs have abruptly halted clearance of consignments from China, which will send a chilling message to foreign investors. They were also concerned that the decision to subject shipments from China to 100% manual examination will delay the supply chain and damage expensive components and critical imports from China, escalating cost and time for the already stressed industry. 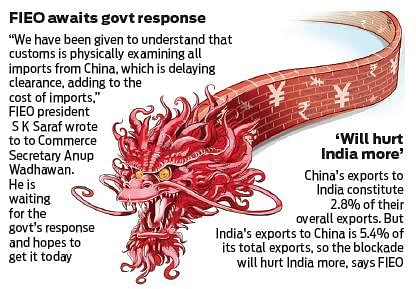 Similar concerns were raised by the India Cellular and Electronics Association, who wrote to Revenue Secretary and Chairman, Central Board of Indirect Taxes and Customs (CBIC), saying that these unannounced and opaque disruptions were hurting the industry. Companies, it pointed out, were nervous about the duration of these disruptions, adding that the supply of 200 industries have being impacted. It requested the finance ministry to intervene.

While the revenue department denied giving any official order to hold Chinese consignments, custom officers admitted that there are delays as they are more careful with Chinese goods. Meanwhile, the FIEO president said that he was waiting for clarification in this matter, which is expected by Friday.

“Kindly take it up with CBIC and, if no such instructions have been given, a denial may be issued by CBIC so that the matter may be communicated to our importers in China and Hong Kong to suitably take up with their customs explaining our stand,” Saraf said China’s exports to India constitute 2.8% of their overall exports, including important input materials like lithium ion battery and key component of pharma, auto components and electronic goods. But India’s exports to China stand at 5.4% of its total exports.

Stay up to date on all the latest Business news with The New Indian Express App. Download now
TAGS
India China Border tensions