Chinese Yuan slumps 0.7% against the dollar after US President Donald Trump threatens new tariffs on Beijing as a retaliatory measure for the coronavirus.

China’s Yuan slumped by 0.7 per cent against the dollar in offshore trade to a one-month low of 7.13 per dollar on Friday with markets reacting to US President Donald Trump’s threats that new tariffs will be imposed on Beijing as a retaliatory measure for the Coronavirus outbreak.

At the same time the global economy showed fresh signs of weakness with Japan reporting on Friday a fall in both consumer prices and factory activity, raising fears that the Asian powerhouse could slip into deflation. European Union’s statistical agency had on Thursday reported that Europe’s GDP had shrunk by 3.8 per cent during the Jan-March 2020 quarter.

On Thursday Trump had said he was confident the virus which has caused most parts of the globe to go into a lockdown, may have originated in a Chinese virology laboratory. The US is believed to be considering retaliatory measures and even removing China’s sovereign immunity from law suits. 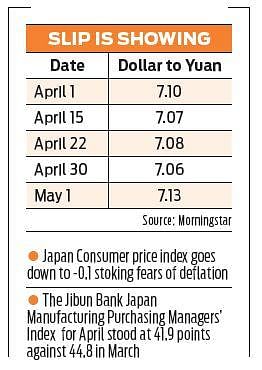 Analysts said this caused the Yuan to fall on Friday. However, any fall in the value of the Yuan may actually be good news for China which has restarted its economic engine.

Said Prof Biswajit Dhar of the JNU a global trade expert, “China may actually be happy to see its currency devalued. It makes Chinese industry more competitive as it can then price its products in a more efficient manner compared to newbie rivals like Vietnam and Malaysia where some of the manufacturing which was earlier in China has fled.”

China has been trying to cut its dependence on the dollar for a long time but hasn’t succeeded till now. In January China had cut the weightage of dollars in the basket of currencies which determines the price of Yuan. It is also now planning to release a digital currency, which too may reduce its dependence on the dollar in trading with its partners. China’s four largest commercial banks have begun internal tests for this digital currency this month.

However, currently the American dollar reigns supreme. According to data with the International Bank of settlement, 88 per cent of all global transaction is done in US dollars. In contrast the Chinese Yuan makes up for just 4.3 per cent of global settlement, despite China incentivizing developing world nations with cheapo credit to buy goods in Yuan. Nations across the world also hold two-thirds of their foreign exchange reserves in US dollars.

China itself holds about $1.1 trillion in US treasury bonds as of February this year, accounting for 15.4 per cent of all foreign holdings, second only to Japan which holds $1.27 trillion or 17.9 per cent. The Catch 22 situation for China, forex market experts explain is that if China were to ever sell its US treasury holdings it would depreciate the US dollar but would also seriously erode China $ 3.06 trillion foreign exchange reserves.

Said Ambassador Pinak R Chakravarty, former Secretary (Economic Relations) “It will be difficult for either power (US and China) to live without the other ... They are too deeply invested in each other.

Data released on Friday also showed Consumer prices in Tokyo fell from for the first time in three years by 0.1 per cent in April.

Japan's manufacturing activity also fell to an 11-year low in April as domestic and export demand plummeted, forcing companies to cut production, according to the Jibun Bank Japan Manufacturing Purchasing Managers' Index released Friday. The headline PMI of 41.9 points in April was down from 44.8 in March.

"The government will work with the central bank to ensure Japan absolutely does not slip back into deflation," Economy Minister Yasutoshi Nishimura told a news conference on Friday. Japan has suffered for nearly two decades of deflation where prices kept falling in response to weakening demand till 2013, when a policy of stimulus dubbed `Abenomics’ after  Prime Minister Shinzo Abe who ordered the change helped arrest the economic decline.

Now we are on Telegram too. Follow us for updates
TAGS
China China Yuan trump Trump tariffs Coronavirus