The move to increase levies on petrol and diesel by Rs 10 and Rs 13 per litre respectively is just the latest in a long series of fuel tax hikes since the onset of the COVID-19 pandemic.

NEW DELHI: The Centre's steep tax hike on petrol and diesel may net it a cool Rs 1.7 lakh crore in additional tax revenue this fiscal, if the increase is maintained for the full year (FY2020-22). On the flipside, Indians now rank among the world's most taxed consumers of transport fuel -- Central and state taxes accounted for over 69% of retail fuel prices in the national capital on May 6, handily beating even highly-taxed European economies.

Tuesday's tax hike absorbs most of the gain from all-time low crude oil prices instead of passing on the benefit to the consumer. It will also almost double Central fuel tax collections from the Rs 2-odd lakh crore expected in 2019-20.

According to global brokerage Barclays, even accounting for a 12 per cent decline in annual fuel consumption due to the pandemic, the hike should earn the Centre an extra Rs 1.4 lakh crore in FY21. A senior oil company sales executive told The New Indian Express that the figure could be as high as Rs 1.7 lakh crore.

The move to increase levies on petrol and diesel by Rs 10 and Rs 13 per litre respectively is just the latest in a long series of fuel tax hikes since the onset of the pandemic.

Since March, tax-starved states such as Delhi, Tamil Nadu, Maharashtra, Goa, Karnataka, West Bengal, Assam, Punjab and Haryana have sharply hiked Value Added Taxes (VAT) on fuel in an effort to plug massive holes in revenue collections. All these increases have been passed on to consumers by Centre-run oil marketing firms (OMC).

As for the Union government, it had already hiked excise duties by Rs 3 per litre each in early March -- absorbing the benefit of the 60 per cent decline in crude prices since January while keeping retail prices unchanged. Global prices went on to collapse further, breaching negative territory for the first time in April. The Indian crude oil basket consequently plunged to a multi-decade low of just $19.9 per barrel for the month from $33.36 in March and $64.31 in January.

Despite this, retail prices have been kept unchanged by state-run OMCs since March 16 (except for state VAT hikes), sending marketing margins soaring to an unprecedented Rs 18 per litre in some regions. Tuesday's duty hike will funnel most of this profit into the Central exchequer.

Taxes on oil and related sectors have been a major source of revenue for the Central and state governments since crude oil prices began falling in 2015. 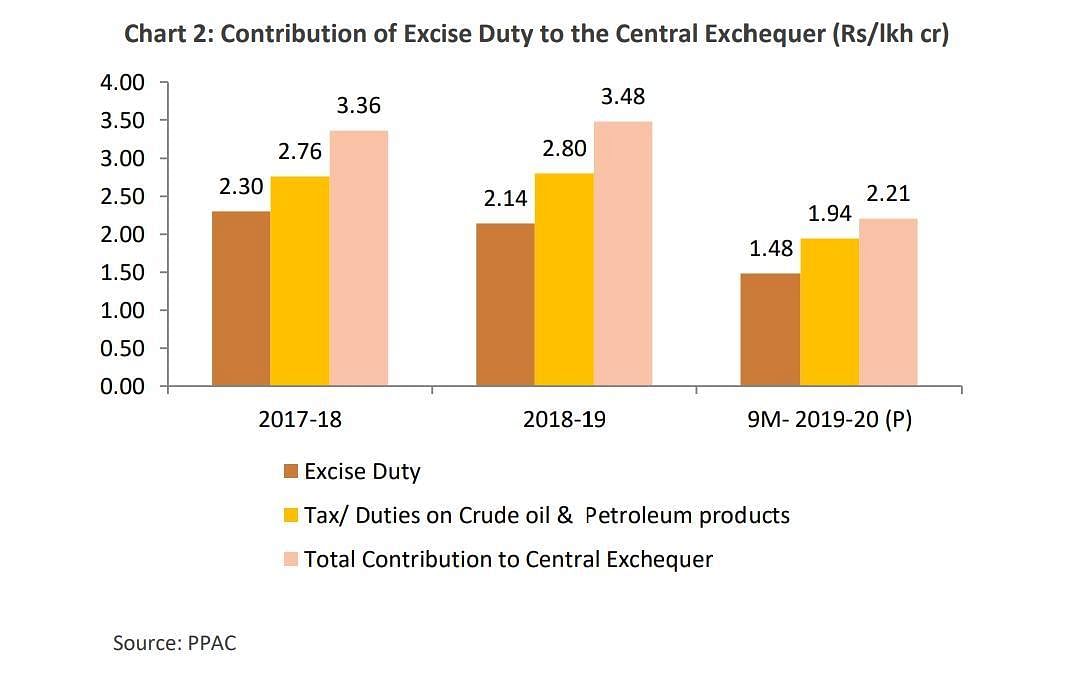 Over the past six years, both the Centre and states have sharply hiked fuel taxes even as crude oil plunged from over $100 per barrel levels in late 2014 to below $20 this summer. But, pump prices for petrol, for example, have remained range-bound between Rs 60-80 per litre over the period.

OMCs to take a hit if crude prices rise

While marketing margins for oil firms remain higher than normal due to the decision to freeze prices, OMCs will lose out from the Centre's move. Especially if crude oil prices recover and the government does not cut taxes in the future.

"The excise duty hike, though on expected lines, could have been taken once demand had fully recovered," said Emkay Securities analysts. "So long as volumes continue to be low, OMCs' net earnings impact would now be negative. The outlook depends on how quickly the lockdown is lifted".

"Against a 30mb/d global demand destruction in April, May would see 17-18mb/d of planned supply cuts and inventory building by consuming countries. Hence, a demand recovery of 12-13mb/d could balance out the market, potentially leading to a price rally," Emkay analysts warned.

Such a rally could take OMC margins well into negative territory if the government doesn't cut taxes, said an industry source. "On the other hand, if OMCs protect their margins and pass on the price rise to consumers, it could lead to a sharp rise in fuel prices and inflation," they added.

Now we are on Telegram too. Follow us for updates
TAGS
fuel tax petrol price diesel price