NEW DELHI: Just a little more than 10 per cent of loans that are written off by public sector banks are finally recovered from their borrowers. 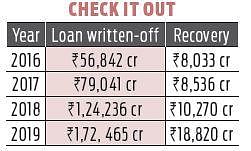 Bankers say prior to the new bankruptcy laws, the recovery of assets of a company or a borrower used to be very time consuming, taking decades at times.

After fast track recovery processes were introduced, the pace picked up but that has not translated into higher recoveries, as the sale of a plant, machinery or assets taken over by the banks yield very little owing to depreciation.

Writing off bad loans has always been a touchy subject, often kicking up political controversies. To deflect criticism, the government and banks have always maintained that writing off loans does not mean that the recovery process ceases.

Last week, the government and the Congress party were engaged in a spat after it was revealed in an RTI reply that Rs 68,607 crore debt of 50 top willful defaulters had been written of till September 30, 2019. A loan write-off is a tool used by banks to clean up their balance sheets.

Now we are on Telegram too. Follow us for updates
TAGS
RTI Bank Loans Loan Write offs