Television news channels, after the earlier TRP fiasco, have now had their credibility dented with the Bihar elections.

Television news channels, after the earlier TRP fiasco, have now had their credibility dented with the Bihar elections. Almost all the exit polls, conducted in conjunction with various sampling agencies, turned out incorrect, predicted as they did either a victory or a landslide for the Tejaswi Yadav-led Mahagatbandhan.

Since they all crowed when they got the 2019 Lok Sabha results right (with the My Axis-India Today celebrating the loudest), they now owe us an apology, and an explanation, on why they got Bihar so very wrong. Instead, all we have heard is deafening silence!

The most outlandish were the India Today-My Axis poll which gave RJD+ 139-161 seats versus NDA's 69-91, and Chanakya-CNN News18 that projected 180 seats for the grand alliance, with just 55 for the NDA. The Times Now C-Voter projection was closer with 116 seats for the NDA, and 120 for the Mahagathbandhan.

The only one that got it right, that the NDA will form the government, was the Bhaskar prediction which had 120-127 seats for the BJP-led NDA. But its 'Grand Alliance' tally of just 71-81 was totally off the mark of 110 seats.

Mixed bag
Ever since exit polls became fashionable a little over two decades ago, their strike rate has been a mixed bag. The exit polls conducted by CSDS for the 1996 Lok Sabha elections correctly predicted a hung verdict. The actual results saw the BJP a few seats ahead - just enough to form the government but not enough to hold on for 5 years. The House was dissolved and elections held again in 1998. It was the first full-term BJP government with A.B.

Vajpayee at the helm and the exit polls got it right predicting over 200 seats for the BJP-led coalition. When the results came, BJP + got 252, Congress + 166, and others 119. Then came two consecutive failures. The 2004 Lok Sabha polls were forecast to be a BJP win; instead, 'the BJP's Shining India' boomeranged, the Congress-led UPA got 222 seats, and Dr. Manmohan Singh became the Prime Minister. In the 2009 Lok Sabha polls, it was predicted to be a close fight with the Congress led UPA having an edge over the NDA. However, the UPA won comfortably with 262 seats.

Bihar, on the other hand, has always been a weak spot for exit polls. They've got it wrong for the last 3 terms. In 2010, the Nitish Kumar-led NDA was forecast to get between 140-185 seats with Lalu Yadav's RJD+ at 50-60. Instead, Nitish got a landslide with 206 seats compared to RJD's 26. In 2015, the exit polls projected a hung Bihar assembly with an edge for the BJP. Instead, the Nitish-Lalu-Congress Grand Alliance grabbed 178 seats to the BJP's 58. 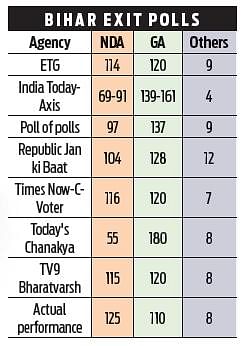 US pollsters get it wrong
US presidential election forecasting, with immensely more resources and weightage factors, have seen exit polls with plus or minus 5 per cent accuracy. However, forecasting has gone awry in the last two rounds. Joe Biden's victory was predicted with a 6 to 11 per cent margin; but even as counting is still to end, it appears his lead is closer to three per cent or about five million votes.

Trump's 2016 victory is more of an enigma. Pollsters had predicted a Hillary Clinton victory. The CBC's Presidential Poll Tracker gave Clinton a 3.4-point lead in national polls over Trump on election day. However, everyone got it wrong save The IBD/TIPP poll, which gave Trump a two per cent national edge over Clinton.

Pollsters now admit there were errors that skewed the surveys. Greater number of undecided voters pitched for Trump in the final days of the race, or in the voting booth. Turnout among Trump's supporters was higher than expected. And the surveys tended to get responses from the more educated, ignoring the Blue Collar trends.

Psephology is a bit of a 'pseudo' science, and more so in India where pollsters face a wider range of caste and religious diversity which is difficult to capture with the small sample sizes they work with. As compared to opinion polls, exit polls have to be collated quickly, and often on the day of the poll itself, thereby enlarging the room for error.

This was in evidence for the last round of voting in Bihar for the Seemanchal region, where pollsters hadn't bargained for a reverse consolidation of the 'Hindu' vote due to the aggressive campaign of Asaduddin Owaisi of the Majlis-e-Ittehadul Muslimeen (MIM). The MIM party won  five seats, more than predicted; but at the cost of the RJD-Congress losing possibly 15-20 seats to the BJP and its allies.
There are also charges of rigging of exit polls, and agencies being set up to favour specific parties. In this conundrum of highly charged election politics, exit polls in India will continue to have poor credibility.