The carmaker continue to bet big on Utility Vehicles to increase its share in the Indian four-wheeler market.

Kia Motors on Friday finally launched its sub compact SUV- Kia Sonet at an introductory price of Rs 6.71 lakh for the base petrol variant. Kia Sonet has so far received more than 25,000 bookings and is clocking over 1,000 bookings each day, the company said.

The carmaker aims to sell 100,000 units of Sone in India and export 50,000 units in the first year itself. Kia has commenced the second phase of production of the Sonet to meet the upcoming demand.

The Kia Sonet will compete against the likes of Mahindra XUV300, Hyundai Venue, Tata Nexon, Ford EcoSport and the Maruti Suzuki Vitara Brezza. There is upcoming competition from the Toyota Urban Cruiser, Nissan Magnite and Renault Kiger as well. 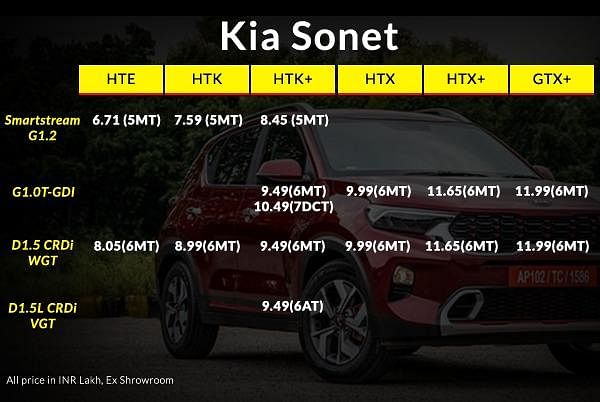 Sonet will be the third offering launched by Kia in its small yet impactful journey in the Indian car market. The carmaker continue to bet big on Utility Vehicles to increase its share in the Indian four-wheeler market.

Sonet is being offered in a dual trim concept of Tech Line and GT-Line with multiple powertrain options. It comes with a choice of two gasoline engines – Smartstream 1.2-litre four-cylinder and 1.0 T-GDi (turbocharged gasoline direct injection) – and 1.5-litre CRDi diesel engines are available with a choice of five transmissions.

The 1.5-litre diesel with 6-speed manual transmission gives an ARAI-rated mileage if 24.1kmpl. The Sonet is available in eight monotone and three dual tone colour options.

Now we are on Telegram too. Follow us for updates
TAGS
Kia Kia Motors Maruti Suzuki Vitara Brezza