In the face of uncertainty, Indians are saving every penny for a rainy day

Interest rates are literally nailed to the floorboards, so the big money flowing into banks, experts caution, could be a sign of rising household stress.

Indians have salted away a neat Rs 1 lakh crore in bank deposits in just three fortnights of the current fiscal (FY22). Interest rates are literally nailed to the floorboards, so the big money flowing into banks, experts caution, could be a sign of rising household stress. 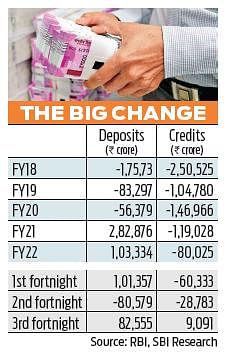 It’s an unusual increase for the months of April and May, and with lockdowns in force, some believe it’s a sign of precautionary savings, compounded by the need to hold disposable cash to counter health and economic uncertainties. Typically, bank deposits and credit offtake decline in April and May. But, FY21 bucked the trend with deposits rising by a staggering Rs 2.8 lakh crore in the first three fortnights.

Now, FY22 is a torchbearer, with customers saving much more this fiscal, but whether this will have a significant salutary impact on consumption spending is unclear. As an OECD paper underscored last December, lockdowns in several countries strengthened motives for precautionary saving among households, discouraging investment and purchases of durable goods.

Pent-up demand may not drive recovery this year

Once the containment measures were lifted gradually, the pent-up demand revived last year. This was the case in India too. However, there could be drag on demand revival this time, with bankers stressing on the rising delinquencies of retail borrowers amid rising job loss and falling incomes.

“Deposits have shown alternate periods of expansion and contraction in FY22 in the first three fortnights. It’s possible that such expansion followed by contraction could indicate household stress as people getting salary credits in first fortnight are withdrawing it in second fortnight for health expenses or stocking up currency for precautionary motive amid an uncertain scenario,” noted Soumya Kanti Ghosh, Group Chief Economic Adviser, SBI.

GDP to grow at 1.3% in March: SBI REPORT
India’s GDP is likely to grow at 1.3% in the fourth quarter of FY21 and may see a contraction of around 7.3% for the full financial year, according to SBI research report ‘Ecowrap’. The NSO will release provisional annual GDP estimates for FY21 on May 31