India's economy escaped with a whole skin in Q4 registering a growth rate of 1.6%. But this lowly single-digit boost couldn't make up for the previous contractions, which literally quartered GDP growth to death, largely led by the chronic 24% decline of April-June, 2020.

In effect, real GDP growth rate contracted to a disturbing 7.3% for the full fiscal FY21. That's a Rs 10 lakh crore hemorrhaging in one year, some of which is lost forever.

At 7.3%, it's the first contraction since 1981 and the severest annual rattle since national accounts have been compiled in India.

It's, though, better than the estimates first telegraphed in January projecting a 7.7% contraction. A year before, India's economy grew by a 11-year-low of 4%, but in comparison it now appears grand.

The National Statistics Office that slaved over the numbers also confirms that the three broad growth measures -- investment, production and consumption -- were slaughtered on the spot due to a broad-based aggregate demand shock and a lockdown-induced supply shock.

As the pandemic roughhoused households into an economic and medical nightmare, they spent Rs 7.6 lakh crore less in FY21 over the previous year cutting costs on almost everything from bread to biscuits to electronics and travel.

It's a crucial cog as household consumption accounts for 56% of GDP, and last year that sank unprecedently into contraction. Put simply, if the economy is a living being, that's pretty much like surviving with a dysfunctional spinal cord.

We could have gotten some mighty bucks aka private investments to spur demand, but that too gave us the chills, not just last fiscal, but even before. It has been the missing piece for some time now as businesses cut back on spending, despite attractive interest rates. Its share fell from 32.5% of GDP to 31.2% in FY21. 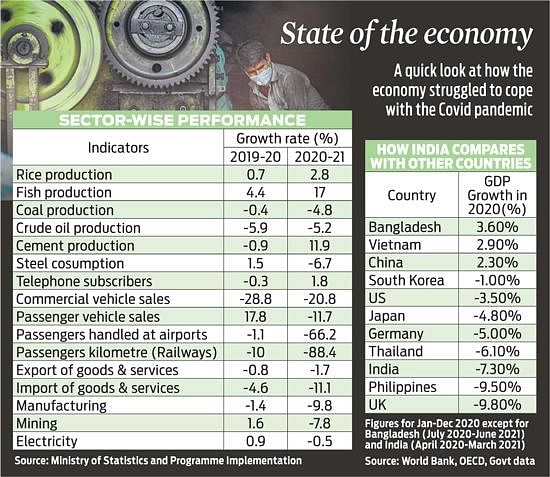 In essence, the economy was left to stand alone on government expenditure, which did play a counter-crisis cushioning role and smoothed aggregate demand, but that was hardly enough to sandpaper the hard edges. Spending was uneven with the opening and closing quarters witnessing Rs 4.5 lakh crore consumption in each, while the other two quarters, expenditure declined to about Rs 3 lakh crore. In all, its share barely grew to 11.7% of GDP in FY21 from 10.6% a year before.

On the supply side, all but agriculture, and electricity and utility services saw a de-growth during FY21. Among the eight broad metrics, the services sector was severely wounded, contracting 18.2%, followed by construction and mining and quarrying at 8.6% and 8.5% respectively.

Agriculture, forestry and fishing hewed much of the nation's wood clocking 3.6% growth, but it was lower than pre-pandemic growth of 4.3%.

Last year, we were told that 2021 was supposed to be a year of Great Reset. In contrast, we still seem to be away from the cusp.

Worryingly, the RBI's consumer confidence surveys show a worsening consumer sentiment and deteriorating sentiments 'on general economic situation, income and prices.' The future expectations index is flashing lower optimism for the year ahead, which means, going forward, recovery will critically depend on private demand revival that may be led by consumption in the short-run but much will depend on the direction of investments, particularly that of the government either by way of fiscal stimulus or increased capital expenditure.

Now we are on Telegram too. Follow us for updates
TAGS
GDP FY 21 GDP Covid and India's Economy Covid-hit GDP