The Central Bureau of Investigation on Friday took the suspended government official S C Jayachandra into custody in connection with a bank fraud case.

BENGALURU: The Central Bureau of Investigation on Friday took the suspended government official S C Jayachandra into custody in connection with a bank fraud case. Jayachandra is the accused number four in a case filed by CBI on December 3.

Jayachandra, who was in the custody of Enforcement Directorate (ED), was granted interim bail by the CBI Special Court on Thursday. Since he failed to comply with a bail condition, he was in judicial custody till Friday morning. CBI sleuths, who had sought a body warrant on Jayachandra, were granted his custody by the local court for the next five days. 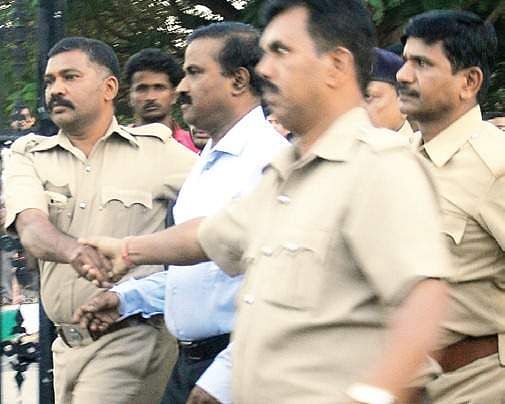 The ED which had custody of the accused since the past one week, had sought to extend the custody of Jayachandra. However, the CBI Special Court had granted him interim bail. ED officials said that the reason for seeking extension of custody was because Jayachandra had not been forthcoming during the course of the investigation.

During the investigation, Jayachandra had consistently hidden the facts that shed some light into the disproportionate wealth amassed by the official. “He pretends to answer all the questions we pose.

There are instances where he has willfully denied any knowledge about bank accounts and other properties though it belonged to him. After much questioning, he will admit to it stating that he had forgotten about it,” an official source said. The official also added that Jayachandra had knowledge of the ‘wide network’ that was involved in the illegal conversion of demonetised notes.

Meanwhile, CBI officials questioned Jayachandra after he was taken into custody on Friday morning. CBI had filed a complaint against him under various sections of Indian Penal Code and Prevention of Corruption Act.