Commuting in gridlocked Bengaluru may become a tad easier. City traffic police are all set to install ‘adaptive traffic signal lights’ at 35 major junctions across the city.

BENGALURU: Commuting in gridlocked Bengaluru may become a tad easier. City traffic police are all set to install ‘adaptive traffic signal lights’ at 35 major junctions across the city. 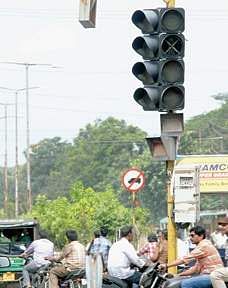 Traffic officials said traffic density at junctions can be captured through CCTV cameras and transmitted to a central server. The cameras will also calculate the queue of vehicles and change duration of the traffic lights accordingly. The Traffic Management Centre will monitor the traffic flow in junctions to prevent traffic congestion.

Many motorists have welcomed the move. “It’s a good idea to have ‘adaptive traffic signal lights’ than pre-programmed timings. There are several junctions in the city where signals don’t turn green quickly even when there are several vehicles lined up, especially during peak hours. Manning of traffic by cops has proved to be inefficient,” said K Manjunath, a regular commuter.