Congress MLA Muniratna, who invited the wrath of Vokkaliga community leaders for his comments on Adichunchanagiri seer Nirmalananda Swamiji, tendered an apology on Monday.

BENGALURU: Congress MLA Muniratna, who invited the wrath of Vokkaliga community leaders for his comments on Adichunchanagiri seer Nirmalananda Swamiji, tendered an apology on Monday in the face of threats of a massive protest by Vokkaliga leaders. 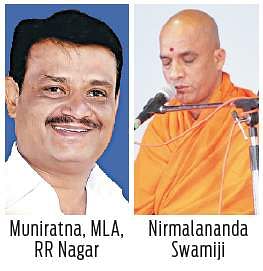 Muniratna, during a recent programme to inaugurate the Kengal Hanumanthaiah Hospital built by the Vokkaligara Sangha, had requested the seer to take over the state administration.

“We have to see whether the seer will be able to deliver something good for the state. It is better to take charge of the administration than to just preach,” Muniratna had said in the presence of the seer.