In the mileu of catching up on deadlines, boarding that last Metro train back home and rushing through traffic, so many of us have failed to notice these artworks.

BENGALURU: Happen to be around Church Street recently? Did you spot Guess Who’s satire on the walls? Or children playing with bubbles on the walls of the MG Road Metro station - an artwork by Harshvardhan Kadam? No? 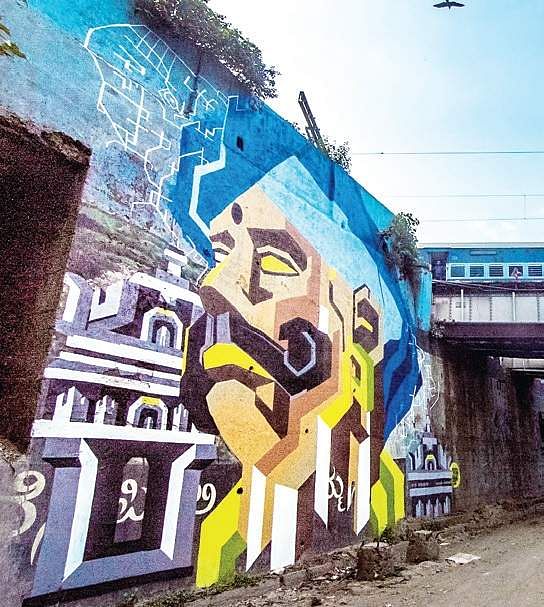 In the mileu of catching up on deadlines, boarding that last Metro train back home and rushing through traffic, so many of us have failed to notice these artworks.

Some of the most prolific Indian urban artists and a few other international ones have transformed the public spaces of Bengaluru in the past month.

The street artists immersed themselves in the city- creating narratives between Cubbon Park, MG Road & Majestic Metro Stations and the surrounding areas.

While the street artists in the past month listened to and interpreted the city by creating conversations around local stories, the spectators haven’t been so fortunate.
And what is art, without an audience? So, here’s your chance to take a ride down the lanes covered in public art.

“Growing up in this city, I have seen a lot of not so great transformations, be it the underpass, bridges, the Metro. It just kept building on - this bare concrete construction,” laments Mehar Zariwala, Director at Institute of Experiential Learning.

On Karnataka Rajyotsava Day, when the city streets will have lesser traffic than usual, she will cycle down from Indiranagar Metro Station to Majestic, along with several others, learning and exploring about the various street art and artists.

“To see that the bare concrete has been replaced with art and to be on my cycle back again is what I look forward to most,” says the 35-year-old.

She however, believes that street art should be an ongoing process in Bengaluru, since it is prone to lose its charm quite easily. “The artwork at public spaces fade off after sometime, some of it chips off or someone else sprays some other grafitti on top of, which cannot be so pleasant looking. We need to have more of street artists transforming our public spaces and not restrict this to a one-time thing,” she says.

“Someone at the hostel  cancelled his flight back home to attend this event,” reads one of the post, on the event’s Facebook page - Gathr Cycles Around, Street Art Hunting.

So, what is it that is leading people to the event, with one even cancelling a Diwali trip back home?

“I saw the event online. Slow cycling around Bengaluru, appreciating the street art on our public walls, surrounded by like-minded people and initiating conversations around art. That is what I am looking forward to,” says Vikram Sridhar, 32, a product marketeer.

The primary intent of the event is to feed the curiosity of Bengalureans around art in public spaces. Priyanka Kumar, an independent visual artist, will be leading the trail of cyclists around and initiating a conversation around the artist’s skills and use of technique in sketching the piece.

“What I want them to take away from the event is an awareness of the street art around us,” says the 27-year-old.

The event is being organised by Gathr in association with GrabOnRent.