BENGALURU: IN a major embarrassment to the Siddaramaiah government, primary and secondary education and minority affairs minister Tanveer Sait was allegedly caught on TV camera watching obscene pictures on his cell phone during a Tipu Jayanti function in Raichur on Thursday. 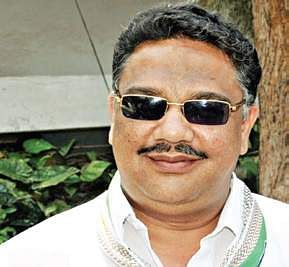 TV channels aired the footage that shows Sait, who is also the district in-charge minister, allegedly watching the sleazy pictures and later switching off his phone and maintaining a calm demeanour.

The opposition was quick to attack CM Siddaramaiah and demand Sait’s resignation. However, the CM said that he would react only after speaking to Sait and ascertaining the facts and would not rely on media reports.

Sait, in his defence, said he had no knowledge about who sent him the message as he never saved numbers on his phone. He said he was updating himself on Tipu Jayanti celebrations across the state on Whatsapp, when he received the message. He also insinuated that this was part of a pre-planned conspiracy to embarrass him and the government.

Incidentally, Tipu Jayanti celebrations had passed off peacefully in the state this time, unlike last year when it claimed two lives in Kodagu district.

As BJP state president BS Yeddyurappa, Leader of the Opposition in the Assembly Jagadish Shettar and JD(S) state president HD Kumaraswamy called for Sait’s sacking, KPCC Working President Dinesh Gundurao came to the minister’s defence. “Sait was just scrolling down his Whatsapp messages he had received on his mobile. He had neither zoomed nor downloaded the alleged sleazy pictures,” he said. Terming the demand for Sait’s resignation as unfair, Rao added, “The minister had just viewed the pictures for a few seconds. It was the TV cameramen who were zooming and blowing up the pictures.”
The issue comes at a time when Siddaramaiah went ahead with Tipu Jayanti celebrations brushing aside BJP protests.

Coimbatore bus tragedy: This lucky Flipkart employee got away with minor injuries