What to do when love in is the air(plane)!

BENGALURU: Spotted a cute passenger on your flight? Don’t shy away from a conversation; what if they’re the one?! Here’s what to do when love is in the air –literally! Finding love on a fl ight isn’t that uncommon.

A few years ago, there was an American Airline passenger called Erica Domesek, who used social media to track down a fellow passenger she thought she had such an insane connection with, he could be her future husband! While she couldn’t get the details from the airline, it got us thinking - are we just fooling ourselves into believing it could happen, or is it just another clichéd rom-com move, telling us that there’s really love out there, even miles above the ground? 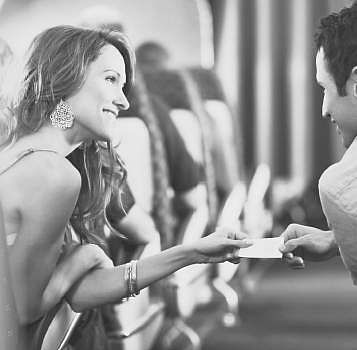 We’d like to be optimistic in our search and say that it’s not such a needlein- a-haystack situation. After all, if you do happen to meet the love of your life on an airplane, you’d like to be prepared, right? So, fasten your seatbelts as we take off to explore a few ways you could turn the sparks into something more with a fellow passenger. Taking off on the right foot Don’t jump right in, ease into conversation with the passenger. You could help with their baggage, introduce yourself and judge their reaction to your approach.

If they don’t look receptive, this is when to back away. After all, nothing is worse than the creepy passenger next to you who’s constantly trying to talk you up when all you want to do is watch an in-fl ight fi lm. Let’s the conversation begin! Pretend you’re talking to a stranger at the bar - even wait for the drinks to be served if that helps! Unlike in a bar however, remember that you cannot get up and disappear if you make a social faux pas.

Remember that you’re going to be stuck next to this person for the next few hours. Throwing in a little fl irting and if there’s a language barrier, a few of your best fl irtatious glances is a good idea too. The fl irtatious glances worked like a charm for Menaka Nair, a PR executive.

“On my fl ight back home from Glasgow, I spotted a guy looking at me. Even though he was a total stranger we somehow had this undeniable chemistry. On our way to the washroom through the long fl ight, we would exchange glances. Finally, he came up to me and spoke in French. And, luckily, I had learnt some! While he would converse in French, I responded majorly in English. Despite the language barrier, we connected seamlessly,” she says.

Time is running out! To turn the spark into something more fruitful is the biggest challenge! If luck is on your side, you will be travelling to the same fi nal destination, which gives you an easy excuse to exchange numbers and stay in touch, or even offer to catch up in the city. Depart in tandem Eventually, it’s going to be time to say goodbye. By now, you’ve already gauged each other’s interest levels - so this next step should be a piece of cake! After all, you’ve got technology on your side now, so framing your “happily ever after” isn’t going to be too hard. Exchange phone numbers, share social media details… and see where it goes! Still skeptical? Don’t be! Even if you’re not lucky enough to fi nd your true love on an airplane, you won’t lose anything from trying. At the most, you’ll walk away with a great connection, a good friend, or a really interesting story for keeps! (The author is the founder and COO of www.fl oh.in. A network that connects singles in real life.)