Bharat Thakur holds first ever painting exhibition in the city

BENGALURU: Yogi turned yoga guru and now abstract artiste; this one man army- Bharat Thakur, never ceases to amaze those who meet him. In Bengaluru for the launch of his first ever painting display at the beautiful Time and Space art gallery on Lavelle road, he says art has been at the core of his heart and soul for several years.

Thakur who mastered Kriya Yoga in the Himalayas as a young child and then as a teenager, believes it is meditation or dhyana and sadhana which virtually open up all the creative centres of the brain. “Any one can do it and watch how your personality unfolds,” he says. 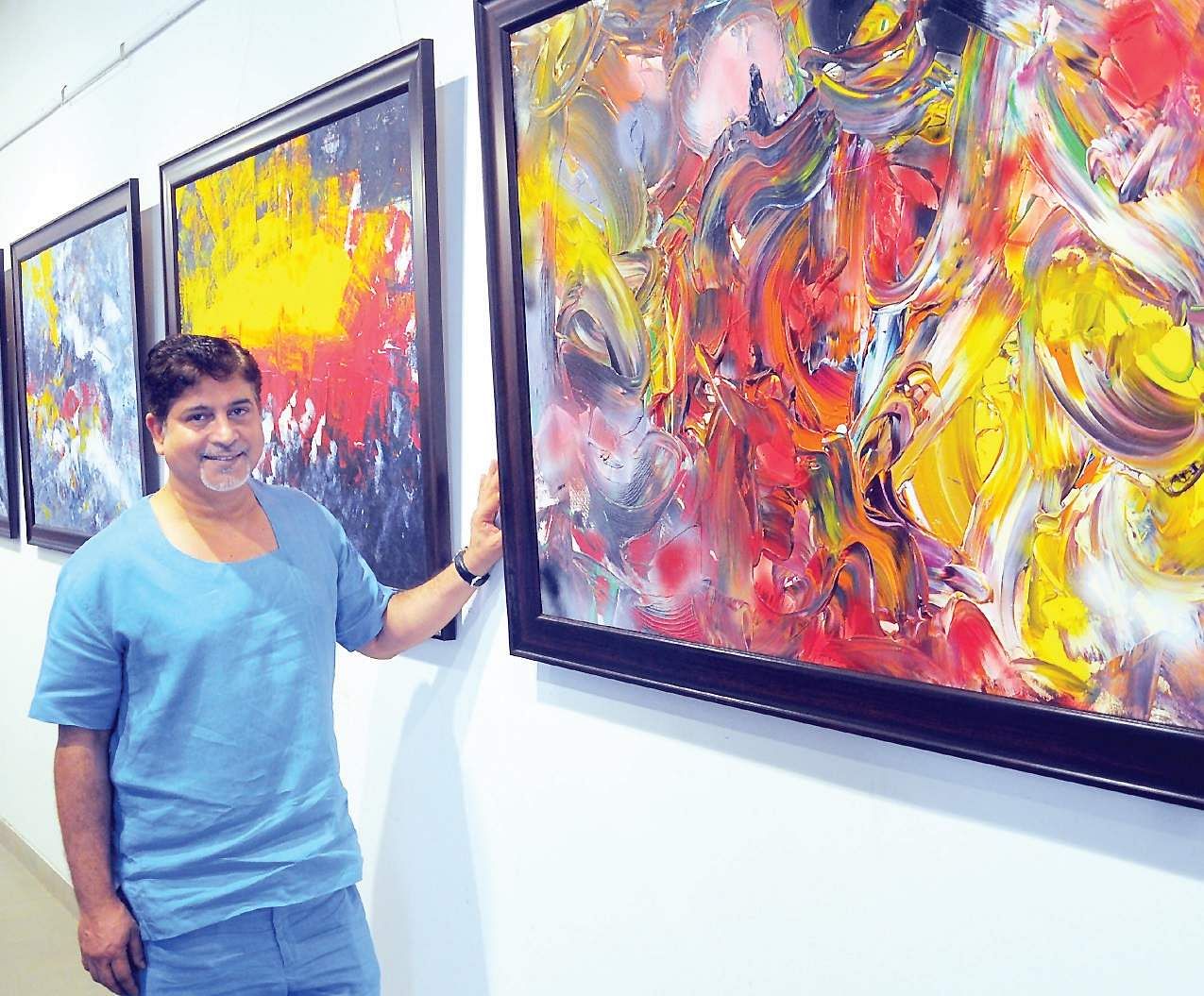 His series of black and white acrylics and other series, which are colourful and vibrant reflect his inner thoughts and emotions and each work has a poem dedicated to it and written by the yoga maestro himself.
Thakur has been travelling all over the globe like a nomad and has spent time with artists in Venice, visiting art galleries and museums, the journey has been fruitful,intense and a learning experience off course.
Yoga has always been on the agenda though. “I have taught yoga to Russian Presidents and Prime Ministers, athletes like Edwin Moses, gymnast Nadia Comaneci, Hollywood stars like Michael Douglas, tennis star Boris Becker and a host of celebrities,”he says modestly.

The sojourn with art started when he would frenetically produce sketches working at night. “I had a big collection and even had buyers who always paid me more than what I would have thought to be the right price. Then one day I just destroyed all of them!”  sounding rather flippant.

It was a couple of years ago that he got into the painting mode again whilst casually playing with water paints and amusing his toddler son Yash who wanted to ‘learn’ how to paint. And then there was no turning back.
Thakur uses his nails, hands, palms, feet and rollers. “All these works are original; I have not used a brush. Infact I do not know how to use one.”

The exhibition showcases 70 of his creations which he says are “powerful works in which he has put his heart and soul. I never sign on the painting, my signatures always go behind. My name should not detract the beholder from the work. I use simple but well finished frames from abroad as it is the art that should be highlighted and not the frame. ”
A student of applied physiology, Thakur started out by teaching yoga at the Scindia School in Gwalior. He is nostalgic about Bangalore and the city holds a dear place in his heart as it is where he opened his second yoga centre.

“I have always been a loner and plan to live in a big house in Bengaluru for the next couple of years, leading a relaxed life and painting a lot off course, enough of travel for a while,” he says.
Marriage to actress Bhumika Chawla hasn’t really changed him. “She gives me a lot of space and that is wonderful.” It was his friend actor Salman Khan who introduced the two of them. Thakur always produces films and revels in the creative space that it provides him, especially discussing the script and editing.
A man of many parts, Bharat Thakur owns a software company, has farming interests and his own chain of yoga schools which are all managed my him.
“I will not open franchise centres,” he declares. “All my teachers are handpicked and personally trained by me.” It is this love for perfection and hard work that is reflected in his art works.
“Come celebrate life with me and be happy “says this Sanskrit and Vedic Mathematics scholar.
His show, The Space Between is on at Gallery Time and Space till December 20. The gallery is open to the public from 11 am to 9 pm.  You can visit bharatthakurart.com to sneak a peek at his artistic endeavours.