The ten-year-old boy Mayank Patel, who was kidnapped from KR Puram on Saturday was locked in a room for more than three hours at a village near Palamaner in Andhra Pradesh.

BENGALURU: The ten-year-old boy Mayank Patel, who was kidnapped from KR Puram on Saturday was locked in a room for more than three hours at a village near Palamaner in Andhra Pradesh. The accused hatched the kidnapping plan to pay off their debts and raise the money for wedding expenses. 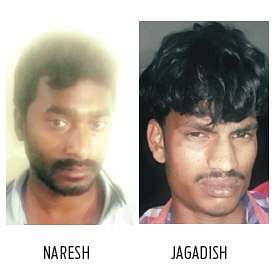 All seven accused involved in kidnapping have been arrested and identified as Naresh, Jagadish (residents of KR Puram), Anil of Ramamurthynagar, Subramani of Maluru village, Venkatesh of Chittur in Andhra Pradesh and Ponnaswamy and Rajesh of Tamil Nadu. They are labourers and aged between 20 and 25 years.
Soon after the incident, a special team had tracked down all the accused. While four of them were hiding in Palamaner, three others were arrested from city itself.

“Carpenter Naresh was in contact with the boy’s father Haresh. He used to buy wood from the timber mechant’s shop since eight years. He hatched the kidnap plan for money with his friend Jagadish, who also wanted money to get rid of debt. They met several times in the area in three months, and studied the locality well,” said a senior police official.

“Two of them wanted money for the expenses likely to be incurred on their marriage scheduled next month,” the official added.

Jagadish bought a Maruti car (silver colour) and the accused stole the number plate of another car of same model and same colour. During the kidnap, they used two SIM cards that helped police track their movement.
After kidnapping the boy, Naresh asked Jagadish to contact Haresh and ask for ransom. He stayed near Haresh’s residence to observe the developments there and mislead the police. He asked five of his associates to take away the boy. They stopped the car more than eight times in 12 hours. They also consumed liquor continuously in front of the boy.

The boy’s uncle Purushotham Patel told Express: “Mayank is a strong boy and he was not scared during the entire episode. They told him that they would not harm him and asked to stay silent. He asked them for chocolates and food and they provided him the same. Jagadish had recently bought some wood and given a cheque to Haresh. He kept a tab on our business too”.