Proposal on Bengaluru's JC Rd steel bridge to be junked?

BENGALURU: The opposition to the proposed steel flyover is likely to take a toll on another similar steel bridge that was proposed to come up on JC Road. Cost escalation by the bidder is also another reason.
The steel bridge from Minerva Circle to Hudson Circle via JC Road was proposed in 2008, and soil testing was done the following year. The cost at that time was estimated at `104 crore. However, the project did not move further.

After 2011, BBMP wanted to construct the bridge under Jawaharlal Nehru National Urban Renewal Mission (JnNURM). But that did not happen as JnNURM was scrapped by the Centre.
Later, the state government directed the BBMP to take up the work under Nagarottana grants. BBMP had called for a tender in February. The 2.35-km flyover project was approved some five months back at the BBMP council at an estimated cost of `135 crore. “We have finalised the bidder, Simplex Infrastructure Ltd,  and it is pending before the state government for approval,’’ said a BBMP engineer.
However, BBMP sources are now giving a different version. “Till recently, that was the plan. After approval from the state government, the work order would have been issued. But after seeing the massive protest against the proposed steel flyover on international airport road, we may now reconsider the plan,’’ said a senior official. 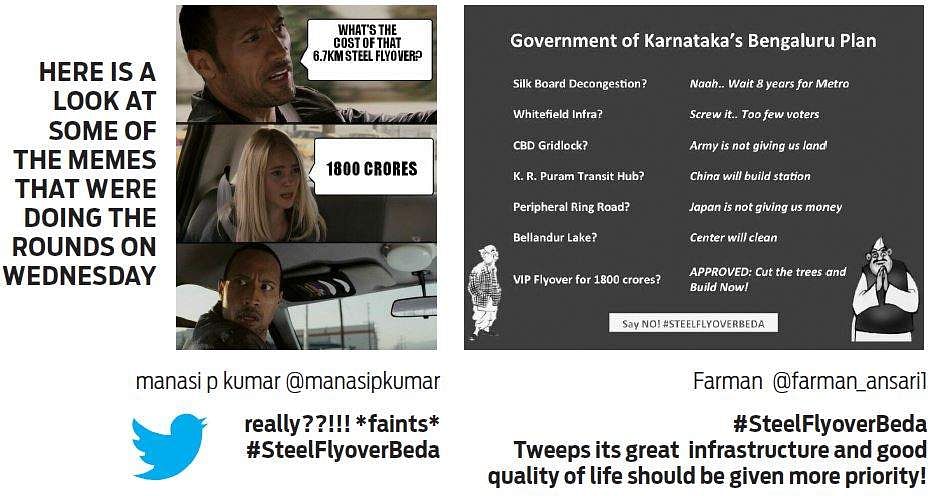 The official said the bidder has quoted `180 crore, which is much higher than the estimated cost (`135 crore). “There was also a proposal before us to call for  retender. But with severe protests, we might cancel the steel bridge proposal completely and construct a concrete flyover between Minerva Circle and Hudson Circle,’’ he said.

When pointed out that the cost of the JC Road bridge would be lower compared to the proposed steel flyover, the official said parameters are different. “The distance, width and also thickness of the steel bridge are different. It’s unfair to compare the cost of both the bridges.’’
The official said a stretch like JC Road is the main connecting road between South and Central Bengaluru. “Constructing concrete flyover might cost less. But concrete flyover is time-consuming. We cannot imagine closing JC Road to construct the concrete bridge. For a steel bridge, fabrication is done outside. Only fixing has to be done here. it can be done in shorter duration,’’ he added.
When contacted, Jayanagar BJP MLA B N Vijaykumar agreed that a bridge is needed to decongest traffic on JC Road. However, he was not sure whether it should be a steel bridge or a concrete flyover.