W​here there’s a wall, these young artists have their creative way

Tattered and washed-out posters and photographs, paan stains and trails of urine.

BENGALURU: Tattered and washed-out posters and photographs, paan stains and trails of urine. Five years ago, that was a common sight if you looked at the walls across the city. But today’s Bengaluru is a picture of contrasts. One can now easily come across graffiti art squashed between posters, stains and hawkers, fighting to grab the attention of passersby. Each designed wall now speaks a thousand words. They also reflect the artists’ dexterity in dealing with a particular subject or style.

When a bunch of three socially unemployed youths (as they like to call themselves) —Vishnu Ambat, Jay Shankar and Sreekumar — realised the worth of murals and graffiti over wall stickers or fixed stencils, they decided to form a group and beautify walls across the city.
Kalakarah was thus born in 2014. The team has now eight members, of whom six dedicate their full time to the painting work, while other two join for certain projects. 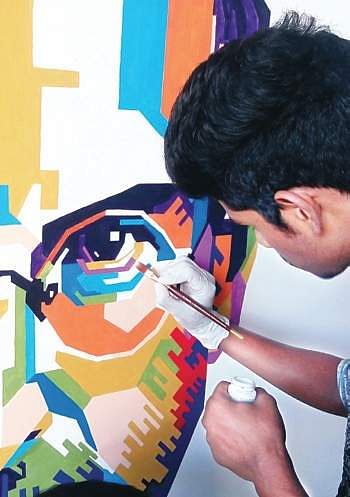 Mess to masterpieces, they scribble a success story

When the three co-founders of Kalakarah painted the walls of their houses in Kochi first, they had little idea about the graffiti. It took them four months to master wall painting and get acquainted with the correct medium and right choices of colours and paints. “We still have unfinished paintings in most of the rooms and our parents are not so happy with the mess that we have left behind,” Vishnu says.
“One day, we three were watching the interview of famous architect late Charles Correa together. He was talking about the importance of wall painting in architecture. That inspired us to form a group and take our work seriously.

We later planned to shift to Bengaluru where the rest of the members joined us,” he says.
They had a humble beginning in the city and initially all the members were involved in painting the dirty street walls. But soon, people started noticing the facelift that they succeeded in giving to these dirty walls with their artwork. A lot of appreciation poured in and subsequently requests from people across the city to paint the walls of their workplaces and homes. The group members specialize in wall art, graffiti and murals, and have painted numerous walls in streets, corporate offices, villas and apartments in Bengaluru in the past three years.

The group often struggles to get permission for painting the street walls. “As artists, our intention is to reach out to the public. Once we get inspired by a particular subject, the temptation to paint it as early as possible pumps adrenaline among us. Graffiti might not be legally allowed at several places but artists find ways to leave an indelible colourful mark,” asserts Vishnu.
The members of Kalakarah mostly choose old, scrapped and dirty walls to showcase their skills and convert these otherwise neglected walls into centres of attraction.

Kalakarah’s main creations
From cool workplaces to quirky interior decors, Kalakarah’s members have worked on them all. At times, they have created wonders by just scribbling on walls. Here’s a list of projects that are close to their hearts.

Landscape with a river
An interior wall art done on a bedroom wall for a client who wanted a
blend of landscape with river and reflection at Embassy Pristine,
Sarjapur Road.
Elvis Presley mural
A pop culture artwork done on an 18X30 ft wall of a bar lounge owned by the owner of Chabbria tiles at BEL Road. This artwork took almost two weeks to complete.
The Astronaut mural
An office space in Koramangala where the employees work from the moon. At least they feel so, courtesy a special mural done by Kalakarah’s members.
The Steve Jobs mural
Commissioned for an iPhone service centre at Marathahalli. This was
one of the Kalakarah’s earliest creations.
The Buddha
A serene Buddha painting on
the wall of a Zen room at Shobha City belonging to an IT couple,
who practises meditation
religiously.
Windmills of your Mind
This is taken from a picture that a couple clicked during one of their Europe tours and wanted a painting of it on one of the walls in their house at Whitefield.