Bengaluru floods: Over Rs 2,000 crore goes down the storm water drains in 10 years

Unscientific works result in thousands of vulnerable locations in and around storm water drains in several areas.

BENGALURU: IF it rains continuously for half an hour, there are chances of the city flooding. This comes from none other than a BBMP official. This is because while the drains’ actual capacity is to hold 80 mm rain, it has reduced to about 40mm. Civic experts attribute it to rampant encroachments and accumulation of silt in the storm water drains (SWD). The Bruhat Bengaluru Mahanagara Palike (BBMP) has spent over Rs 2,000 crore on works related to SWD in the last one decade. But where has all the money spent on remodelling of drains gone? In BBMP limits there are 633 SWD of 842 km, including primary and secondary drains. According to the data given by BBMP Commissioner N Manjunath Prasad, A2,207.33 crore has been released to BBMP under various grants like JnNurm, 14th Finance Commission, Nagarottana and BBMP’s grants between 2006-07 and 2017-18. Of this amount, the Siddaramiah government sanctioned around Rs 1,543 crore. This also includes CM’s Nagarottana special grants in the years 2016-17 and 2017-18. Despite spending crores, there are thousands of vulnerable locations in and around storm water drains because of unscientific works by contractors and engineers.

A recent case is the flooding of Koramangala. Last week during a review meeting, Bengaluru Development Minister K J George directed the BBMP Commissioner to issue show-cause notice to Koramanagala engineer and the contractor for doing unscientific work that caused flooding last week. “The contractor had removed the retaining wall at multiple locations which was not needed. This led to flooding at Koramanagala,” Bengaluru Mayor G Padmavathi said. In July 2016, BBMP officials had given a list of 1,953 SWD encroachments to the Chief Minister. Of which,1,255 encroachments have been cleared.

“We have written to the Joint Director of Land Records to depute land surveyors as they have to mark the encroachments, but it is not done yet,” said a senior BBMP official. “In some cases, those who have encroached upon drains approached court. Unfortunately, our officials are hand in glove with the encroachers. That is also one of the reasons why encroachments were not removed. While we spend on constructing one half of a drain, the other half will be encroached upon. This also means, water flow will not be smooth,” the official said. “The other reason is the shoddy work by our engineers. For instance, the engineers remove the silt but dump it on the side. When it rains, this will be washed back into the drain,” he said. 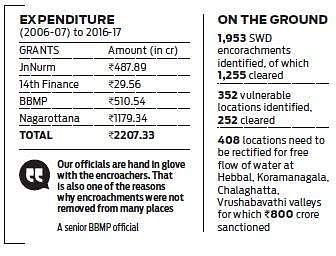 Now we are on Telegram too. Follow us for updates
TAGS
BBMP K J George encroachments storm water drains