After years behind prison walls, they walked to new freedom

Sabeena was visibly relieved as she walked out of the Central Jail carrying her two-year-old son in her arms.

BENGALURU: Sabeena was visibly relieved as she walked out of the Central Jail carrying her two-year-old son in her arms. Still in her early 30s, she had spent the past 10 years in jail and her son was conceived when she was out on parole. As the child began to cry, Sabeena took him into her arms and cradled him.
Many such emotional reunions were witnessed outside the Central Jail at Parappana Agrahara on Wednesday as 50 prisoners who were serving life sentences were released for their good conduct.

Parashuram (32) was smiling as he led his 85-year-old grandmother Parvathamma out after she had served 10 years inside. “I too was in this jail for five years. I was released five years ago and now I am taking my grandmother home,” said Parashuram, a native of Hosanagar in Shivamogga district. He, along with both his grandparents, was convicted on charges of abetting a woman’s suicide. His grandfather Nagoji Rao died while serving his sentence. 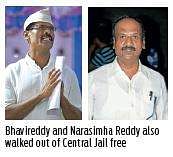 Bhavireddy was among those who utilised the 14 years inside prison in an extremely productive way. Speaking in a function to mark the release of the convicts, attended by Home Minister Ramalinga Reddy, he said on his arrival 14 years ago, he was plagued by questions of self-doubt — what he would do in jail, whether his life was worth living, whether he would ever be released.  “After I was allotted hospital work here, I busied myself as a male nurse and served patients, including those with mental disorders. With support from staff members, I did this throughout the 14 years and now want to lead a good life with my wife and children,” he said.

N S Narasimha Reddy (48) of Bagepalli taluk in Chikkaballapur district, as reported by Express on Wednesday, has completed three post-graduation courses while serving 14 years in jail. Speaking at the event, he proudly announced that both his daughters had become engineers during his term. Even in this moment of joy, he remembered his fellow inmates. “Some inmates have served over 20 years. I request that they be released as they too have families and other responsibilities,” he said.Reddy has done P-G courses in Journalism, Economics and History.

Home minister Ramalinga Reddy said the prison had an optimum capacity of 3,500 convicts, but currently holds over 5,000. He said required arrangement will be made in the coming days, including a separate block for female inmates. He had visited the prison three months ago and had agreed to consider the release of long-serving prisoners. He said the process had got delayed due to technical difficulties, and added he will also try to arrange for the release of other inmates. Additional Director General of Police (Prisons) N S Megharikh, ADGP P K Garg, DIG (Prisons) H S Revanna, and DCP South-East Boralingaiah were present.