Should mini forest make way for a park?

Rajajinagar residents divided over conversion of a green space

BENGALURU:Several residents of 3rd block, Rajajinagar,  are protesting against the development of a park on 1.5 acres owned by the government,  which was left vacant for about 15 years.

The initial plan of Mayor G Padmavathi was to build Indira Canteen on the premises but because of opposition from the residents, she says, the idea has been scrapped and instead this park was proposed. The land was earlier leased to Mysore State Electricity Board by City Improvement Trust Board (CITB). The lease for 30 years expired about 15 years ago. A resident Geetha Misra says, “Today, because of non-intervention of humans, a lovely mini forest has developed inside. This space is cleansing air up to 3 km, no ambulance has entered our area in the past four years.”

The small forest houses several species of wildlife and trees. She adds, “There are fig trees that are more than 50 years old. There are banyan trees. You can see parakeets, peacocks, squirrels and migratory birds such as green-breasted pitta and ravens.” Ayu Lodha, a wildlife rescuer, says, “It’s a good habitat for nocturnal animals. Cutting trees or developing a park would disturb them. Let it be open for public for walking for two hours in the morning and evening. But they should not put in any lights or do any sort of construction inside the premises.” Lesser the human intervention, the better, adds Geetha. “Green cover is the need of the hour. We are planning to plant more trees there.” 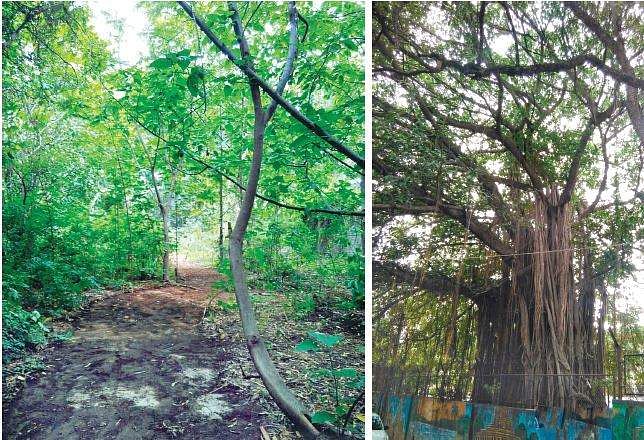 She says the work for developing a park will begin today. “I spoke to the corporator and she agreed. The MLA Suresh Kumar is serving his third term there. He did not build a park. So, when residents requested me to do it, I decided to develop one from the Mayor’s grant.” Geetha claims that the mayor is trying to break the unity of the residents. “I had filed a PIL a year ago to evict 65 stalls on the footpath that mayor had supported. I won it and got them evicted. She holds a grudge against me for that. It’s not just me but several residents who are opposing the move.” Another resident Manjunath Subrahmanyam is also of the opinion that the place should be maintained as it is. He says, “It should be maintained like Buddha Jayanti Park which is like a mini forest in the heart of the city of Delhi,” he says, adding, “The status quo of this forest area should also be maintained. If people start using it as a park, that would disturb the birds.”

In support of the park

Meanwhile, more than 75 residents have come out in support of developing this land as a park. They wrote a letter to the Mayor on July 4, a copy of which is available with City Express, demanding a joggers track, street light, toilets and easy accessibility to the public. Madhukar B N, a resident says, “We also support the cause of environment. We just want a park for the senior citizens to walk. We can develop it without cutting any trees.”

Geetha opposes this saying there are already such facilities in the neighbourhood. “This will lead to commercialisation,” she says. “There are already three more parks in the same area with all facilities. Why do they want another such park?” When City Express contacted Suresh Kumar, he said he did not receive any notice from any authority about developing a park. “I am in Mysuru for work assigned by BJP State president Yeddyurappa,” he says adding, “Once I am back, I shall meet the authorities. I will be able to give an opinion only then.” But he says, for development, no trees should be cut.

Now we are on Telegram too. Follow us for updates
TAGS
parks green space trees