Season 7 of the US legal drama Suits premiered first in India, on Comedy Central, 12 hours before its American telecast.

BENGALURU: Season 7 of the US legal drama Suits premiered first in India, on Comedy Central, 12 hours before its American telecast. Bengaluru fans were excited about the show on Friday, before the telecast at 8 pm. 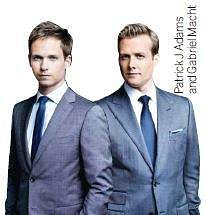 They were waiting to see the dashing leads and listen to their friendly jibes, and to see how lives of various characters will progress. Patrick J Adams, who plays the lead Michael Ross in the show, tweeted: “Wrapped. Crazy honor working with our incredible crew and crew. Excited to share 100...”
Astha Jain, a HR business partner, said that the show has never disappointed its fans. “The series has been a huge hit. So, we are expecting a lot from the upcoming season. Also, we always have had to wait for the TV shows to be run on American channel to watch online. This is the first show to be premeired in India, so it’s nice.”

Another fan Avantika Nair said that she was looking forward to seeing how Louis will ‘Litt up’ after he breaks up with his fiance. “Also, I want to see how Louis and Harvey take the firm forward without Jessica. I obviously would like Harvey to become the managing partner. I look forward to see the comedy jibe that Mike and Harvey pull at each other,” said the PR professional.

Homa Abdul Hamid, a lighting and composition professional at an animation studio, finds the show different from the other legal dramas. “It’s about Mike who does what he does because of the bad situations he is in, not because he is a bad person. Both the main characters Harvey Specter and Mike Ross are good looking. That helps too,” she said,  giggling. She added that the series has moved forward and is not just about Harvey and Mike anymore. “Donna has been like a bystander so far as a legal secretary. But now, she seems to be moving forward and trying to find her place among the bunch of lawyers and associates. Storywise, other characters have come in the play too.”

Adarsh Ram wanted to see how Mike and Harvey will create a work environment together with Mike’s integrity always being a doubt. “I find Rachel irritating sometimes. The scenes between the couple Mike and Rachel are too cheesy and melodramatic sometimes and it kind of spoils the show.” Deepty Josh, a recruitment consultant, also finds Rachel a little boring but she was looking forward to see Donna and
Harvey together.