Hundreds of workers from UP, Jharkhand, Odisha will return home after work on Phase 1 concludes.

BENGALURU: It has been months away from loved ones for hundreds of workers who have been toiling on the ground as well as 60-feet below to complete Phase-I of Namma Metro.

With final touches being given to Chickpet and KR Market Metro stations, the workers will soon head home to Jharkhand, Uttar Pradesh, Odisha and West Bengal when it is all over.

The oldest worker here, Mohammad Sajjad Ali (43), is looking forward to spending time with his girls Tabasum and Rehanna Parveen at Bansbadia village in Hoogly district of West Bengal. “It has been seven months since I saw my family. I will spend at least a month or two with them before setting out again to work in any other city for a different project,” he told Express. 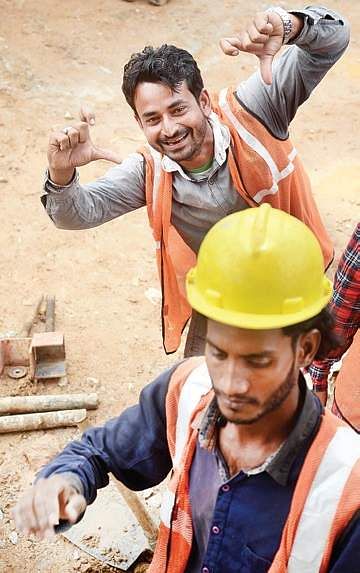 The Rs 12,000 he sends each month to his wife helps his family and mother survive. “Tabashum is studying in Class 9 and Rehanna in Class 5. I want them tp study what they want as much I can afford to,” he says.

He has been associated with Metro for over two years now carrying out cutting and welding work. A veteran with Metro projects, his experience includes the Jaipur and Chennai Metros.

Express caught up with a good number of the 540 workers of Coastal TTS-JV, the contractor entrusted with the work on the North-South underground corridor by Bangalore Metro Rail Corporation Ltd. Most of them have worked in 10-hour shifts either during the day or night to ensure that the Phase-I of Metro meets its deadline for full completion. Hundreds of others have returned after 33 km of the 42.3 km Phase-I was completed in May last year.

Rajesh Choudhary from Bihar, working for BMRCL since 2013, says that a wonderful bond has developed between all of them. Asked about the danger involved in the work, Choudhary says, “As long as the safety rules are adhered to, we are really safe.” This point was seconded by many around him.

A handful of workers from Karnataka and Tamil Nadu who are part of the workforce too seem to have jelled well with the group.

‘No one dares say a word to workers’

With finding a good workforce being a huge problem, the workers are treated very respecfully. “No one dares to direct their anger at them for delay in completion of a job or any other problem as they could just walk off the project,” an official said.

There is a huge competition between different contractors working for BMRCL to boost their workforce. “We are very careful when speaking with them. They are actually a pampered lot,” he adds.

All of them have been provided accommodation, food and bus transport by the contractor. Camp houses at Talaghattapura on Kanakapura Main Road have been their homes for years now.  “Special food is served to them on on Sundays and they are permitted leave whenever they want them,” said HR Manager S Manjunath.

Air is pumped down daily

Explaining how the employees survived down under, Additional Chief Engineer (underground section) Subrahmanya Gudge, said air was pumped 60 feet down daily to help the workers survive. Gudge, who had overseen the East-West underground corridor of Metro, also undertook all survey work of the North-South corridor. “Without pumping air, it is impossible to work 60 feet below the ground. It keeps the atmosphere below cool as well, as the air quality is maintained,” he adds.

Metro services between Mantri Mall Sampige Road Station and Nagasandra were disrupted for 36 minutes on Friday due to a technical problem. A release stated that an electrical problem occurred at 11.20 am at Sampige Road Station. Passengers aboard the train were refunded the fare. There was no evacuation undertaken as trains did not leave the platform.

The workers have to walk 45 steps to reach the ground level every time they want to use a toilet. The same holds good if anyone wants to have a smoke too. Smoking and consumption of alcohol is strictly banned during the shifts. There is a lunch break and an hour of relaxation when workers change their shifts.