Can you design a hybrid two wheeler? It’s a dare

BENGALURU: With the threat of climate change looming large, automobile companies are trying to manufacture different kinds of eco-friendly vehicles. Hybrid cars have become a big thing in the automotive industry, however for a country that uses the highest number of two-wheelers in the world, there is strangely nothing called a hybrid two-wheeler in India.

The Indian chapter of the Society of Automative Engineers or SAE, a world body of professional engineers from various industries particularly the transport sector, is organising a one of a kind hybrid two-wheeler design and build competition for college students throughout the country. Designs and concepts developed by students would be further put under the mentorship of seasoned veterans of automotive companies, who will be a part of the competition.

Challengers from every corner 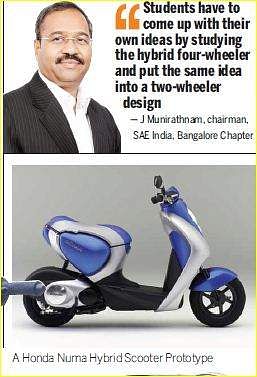 A majority of colleges from Karnataka and Bengaluru have registered to take part in the competition around November-December. So far as many as 20 teams from various states have registered. The SAE is known to organise a number of competitions regularly for students throughout the world.

J Munirathnam, chairman, SAE India, Bangalore Chapter, says, “This is the first time SAE India is organising an event of hybrid two-wheelers. Today we do not have a benchmark of a perfect two-wheeler hybrid. The student have to come up with their own idea by studying the hybrid four-wheeler and put the same idea into a two-wheeler.” Putting the same concept into two-wheelers is quite a challenge with most of the vehicles in this section either being electric or fuel based adds Munirathnam.

A team from PES University is one of the 20 teams which have registered for the competition. Prof SS Patil from the institute’s mechanical engineering department and mentor to the college team says, “The first task in the competition will be to come up with a virtual model using software tools and then building the actual thing. Designing the battery pack is the biggest challenge. There are certain batteries available in the market and modifications need to be made for a smooth transition.” India is shifting to hybridisation and the industry is looking at a new generation of students and young engineers to provide a breakthrough, adds Prof Patil.

Munirathnam says that the concepts developed by students, if they have a potential, could be put into an incubator for further development.For a few years now, there have been talks of hybrid scooters being released in the Indian market by Indian and foreign auto majors. Some have even unveiled    prototypes.