Come rains, water starts dripping from walls; Buckets have been placed to collect it

BENGALURU: It’s raining ‘buckets’ literally in a couple of Metro stations. Walk into these stations and you will find buckets placed at strategic positions to collect water seeping from the walls. In some stations, you have alert housekeeping staff constantly mopping the floor to prevent passengers from slipping.

In the midst of swanky interiors and creative art works at many Metro stations, one will notice water dripping from walls or many ugly cement patches sealing water leakage points on walls. Despite the best efforts of Metro Rail Corporation Ltd to plug these leaks, the water seepage at Metro stations is here to stay. 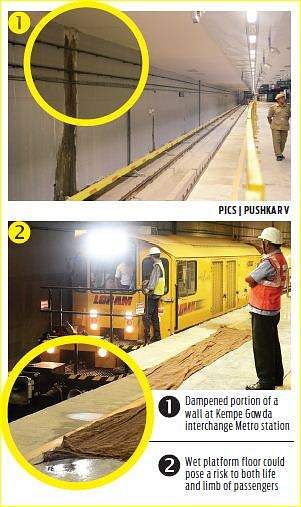 Underground stations are the worst hit. The brand new Kempe Gowda Metro station, K R Market and Chickpet stations on the stretch between Sampige Road Mantri Square Road and Yelachenahalli which will be inaugurated on June 17, as also the Cubbon Park and Vidhana Soudha stations have water dripping a little often. This increases during rains.

Older Metro stations like Indira Nagar, Peenya, Yesvantpur and Dasarahalli too had heavy leakages especially during rains. But they have been controlled considerably this year. The gushing of water from below the ground hampered the construction of Vidhana Soudha station for a few days.

However, Metro stations are equipped with automatic pumps that can drain out accumulated water at short notice.

Asked about the leaks, BMRCL Managing Director Pradeep Singh Kharola said that the leaks were caused due to very good groundwater table levels in certain areas of the city where Metro stations have been constructed.

“Compared to the previous year, we have reduced the leakages in the stations this year. We are understanding the points where leaks can take place and are plugging them,” he said. It must be borne in mind that the underground stations reach a depth of 60 feet below the ground.

Another Metro official pointed out that the Kempe Gowda station is presently located on what was once the Dharmabudhi lake bed.

Now we are on Telegram too. Follow us for updates
TAGS
Namma Metro s