LS Hilton says she was surprised when an agent showed an interest in her novel with explicit sexual, violent content

BENGALURU: Lisa Hilton, author of 2016’s bestselling erotic thriller, Maestra, is on her maiden trip to India to talk about Maestra’s sequel, Domina. The book, which launched earlier this week, follows the life and adventures of Hilton’s fierce, independent and sociopathic protagonist, Judith Rashleigh.
Hilton, who is also a historian, novelist, art critic, journalist and opera librettist, says that despite Maestra becoming something of a sensation for its explicit sexual and violent content, says that she was surprised to find an agent for it at all. Now, Maestra’s being developed into a film, and will probably hit screens in 2018, says Hilton. City Express caught hold of the author with the piercing blue eyes while she was still in the UK, and she speaks to us about everything - from what she’s looking forward to the most in India and finding her feet. 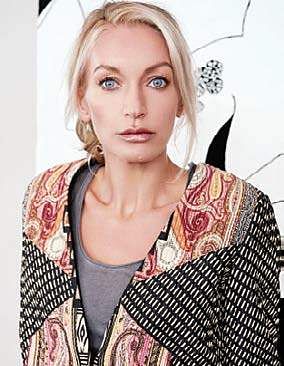 Can you tell us a bit about your writing style and where you draw your inspiration from?
I began my career as a historian. I am the author of five historical biographies and three historical novels. So Maestra and Domina are a real departure from that. It’s the first time I have worked in contemporary and in thriller, and I suppose my inspiration is from classic noir fiction of the Roman Chandler style, except I want to remake it to the 21st century.

How difficult  is to jump from being a journalist to being an author? Does your journalistic interests and your style as writing as an author merge at any point?
I think they probably do, certainly when it come to my interests. As a journalist, I have written quite widely on history of art and I also write a restaurant column. So, yes, food and art are important themes. Stylistically, I think journalism is a fantastic training for writing fiction because you have to focus on brevity and clarity, which are really important.

How did you feel being compared to EL James (Author of Fifty Shades of Grey)? Do you find any similarity in your styles?
I should sincerely hope not! I think it’s a flattering comparison, especially if I could bring happiness to even half her readers.

You’ve mentioned initially people hated your book Maestra initially, including your agent. However, it went on to become a bestseller. Were you expecting that kind of response? And why do you think people disliked Maestra?
I was astonished that Maestra found an agent at all because my former agent said that it was disgusting. I was so desperate that I gave it to my publisher for no money at all. I must say that the reactions to Maestra have been as much positive as they have been negative. It just seems to be a really divisive book - people either really love it or really hate it. I certainly never expected it to have the success it has had, and I feel very lucky it has provoked very strong reactions. I feel that if people get angry about what you are doing, it means that they are engaged, it means that they are energized, and I think anyone who can write anything that can get people to start a conversation about books is maybe doing a good thing.

Maestra’s being made into a film now. How does that feel, and what will your role in the production of the film be?
It is very exciting. Hopefully, we are going to see something on the screens in 2018. My role will be very minor - I will advise on occasions where required, but the screenplay has been written already by Erin Cressida Wilson, who adapted The Girl on the Train.

Tell us about how you created Judith Rashleigh and how she represents the modern woman.
I think Judith is a very modern woman. She displays strength and occasionally tenderness. I think she is perhaps quite typical of her generation, in that she has a more liberated attitude towards pleasure than perhaps someone of my own age has. She certainly a vivid way of expressing it.

Off the top of your head, who do you think would be apt to play Judith?
I have absolutely no idea, since I don’t know what Judith looks like. She is never described in any of the books. I only know what she sounds like. The part could be for any actress who wants it.

Fifty Shades of Grey was seen as more of a guilty pleasure rather than a piece of literature. How do you think Maestra is different?
I never feel guilty about pleasure.

Tell us a bit about your new book Domina.
Domina continues Judith’s story. Hopefully it will be very surprising to readers who have already followed her journey in Maestra. It’s a really fast-paced page-turner, which takes us to Paris, Venice, Serbia, and to a Swiss ski resort. It’s maybe a dark book, but hopefully, a funny book. It’s certainly preparing the way for more surprises in the last of the trilogy.

You are also an opera librettist. How is the writing style for opera different from novel writing, and how did you get into this?
I was really thrilled to have the opportunity to write Love Hurts, which had its premiere at the Piccolo Teatro in Milan, Italy, last year, and then moved to Broadway in New York. It’s set in the 18th century, which initially obviously imposed certain constraints on the kind of language I would use.
But what was useful, from a technical point of view, was how concise one has to be in libretto. Obviously, you are conditioned to a strong degree by the requirements of the score, but you also have very, very few words in which to paint a picture. So that was a real exercise in compression and discipline for me.

What are some of the things you are looking forward to do in India? Any must-visit places on your itinerary?
Unfortunately, I don’t think I’m going to have the time to visit very much. What I am most excited about doing is eating Indian food.
I’ve already tried lots of things, such as chhole and coconut chutney, but I’m looking forward to trying more. Hopefully, I will have the chance to sample many more of India’s wonderful dishes while I am here.