Jump-start to the next level

Whenever recommendations for ‘the best card game’ are asked for, ‘Race for the Galaxy’ is inevitably one of the names mentioned. And for good reason — it’s a crunchy and satisfying game that requires a blend of strategy and tactics. However, it isn’t entirely without flaws, most notably its intimidating use of iconography and less-than-user-friendly rules. Now, though, there’s ‘Jump Drive’ — another card game set in the same universe, that plays like a simultaneously streamlined (and turbocharged!) version of its big brother. 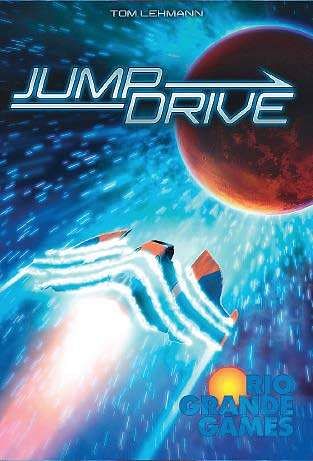 If you’ve ever seen ‘Race for the Galaxy’, you’ll feel right at home with ‘Jump Drive’ — the game reuses much of the artwork, card names and — yep — some of the iconography. However, the overall package is much more accessible and quicker to just pick up and get playing. As far as theme goes, it adopts the same abstracted sci-fi approach as Race; and that’s about all I need to say here, because theme is not the point of this game.

A clue to ‘Jump Drive’s biggest strength lies in the name — this game takes off at warp speed. It’s a race to 50 points, which will seem like some way away after

the first couple of rounds; when you’ll be eking out a point or two from whatever planets you’ve managed to colonize or developments you’ve managed to...develop. But this game has an exponential growth curve like nothing else I’ve played — in fact, the rulebook felt it necessary to state that games typically only last 6 or 7 rounds.

And these aren’t going to be 6-7 rounds of drawn-out cogitating either. In a given round of ‘Jump Drive’, your choices essentially boil down to this — do you want to play just one card and get a bonus (depending on the type of card), or do you want to play two cards instead? That’s it, that’s all you do on a given turn, and it doesn’t even seem like that hard a choice, does it? It’s a race, so obviously you want to play more cards...right? You’d be wrong there. Sometimes, you’ll need to take it easy on a round to ensure that you’ve primed your engine to blast off in the next. It’s a tricky decision, not aided in the least by all of the insidious combo potential of the cards — and here the ‘Race for the Galaxy’ DNA shines through.

So there you go — ‘Jump Drive’ is an excellent newcomer to a venerated gaming series. I think this could be a decent stepping-stone for newcomers to ‘Race for the Galaxy’ — if you just want more after playing ‘Jump Drive’, that’s what you should try next. On the other hand, maybe all you want is a quick-playing purely tactical card game that goes from 0 to 60 in seconds flat...in which case you’ll be happy right where you are.