The photo of the 10-year-old girl whose body was found in a canal in Magadi on Friday was chosen from among eight photos of minors for human sacrifice by an occultist.

BENGALURU: The photo of the 10-year-old girl whose body was found in a canal in Magadi on Friday was chosen from among eight photos of minors for human sacrifice by an occultist.

This and other shocking details came to light after the arrest of prime accused Mohammed Vasil (42), his sister Rashidunnisa (36), residents of Sunakal village in Magadi, black magic practitioner Naseem Taj (38) of Goripalya on Mysore Road, and a minor boy. 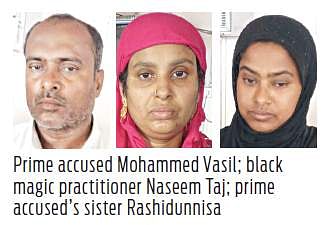 Giving details of the horror tale on Sunday, Magadi police said the heinous crime was committed in the belief that the sacrifice of a minor girl would cure Vasil’s younger brother Rafiq of paralysis. The vicitm was their distant relative.

Ayesha B, daughter of Mohammed Nurulla Gulab, went missing on March 1 and her body was found on Friday. She was smothered to death.

Vasil was despertate to get Rafiq cured. Rafiq used to run a medical shop in Tumakuru. After he had paralysis, he returned to Sunakal village and started living with Vasil, who runs a small-scale industry there.

Vasil was looking at various options and came in contact with Naseem Taj who used to visit his house to learn black magic from his father Shukur. After Shukur suffered frequent bouts of memory loss due to old age, Naseem became active in the area.

When Vasil contacted her, she had advised him that a girl aged between eight and eleven years should be sacrificed to get Rafiq cured. She told him that Rafiq would see positive results within 40 days.
On Naseem’s instruction to send the photos of minor girls, Vasil took photos of eight girls in the village and sent them to her over phone. Then she finalised Ayesha as the candidate for sacrifice.

On Wednesday, the minor boy, the fourth accused, took Ayesha to his house nearby. Vasil and his sister picked her up and brought her to their plot. There they bound Ayesha’s legs and hands with a rope. Naseem, who reached the spot by then, told Ayesha she would hypnotise her and transfer a soul into her. Then they performed some rituals and tied a lemon to her leg and bound her neck tightly with cellotape. Vasil allegedly smothered her to death. On Thursday, he threw her body into the canal, police said.

On Friday, Ayesha’s father who began a search for her found signs of black magic at the spot and suspected she may have been sacrificed. After finding her hair clip there, he immediately alerted the police.

Police who interrogated Vasil learnt that it was Naseem who gave the idea of black magic to him.
Police said during interrogation they confessed to the crime.