The dancer and choreographer’s piece “Queen-size” is an intimate affair and comes with a directive for the audience.

BENGALURU: The dancer and choreographer’s piece “Queen-size” is an intimate affair and comes with a directive for the audience.
“The audience can enter the performance space at specific intervals through this period, and stay for as long as they like,” informs the circular for the performance.
The performance and the way it is stage provides the audience with the choice on how they can view it, the angle they want to watch it at and the will to leave as and when they want.
“The piece is non-linear. There are seven fragments repeated three times. The actors decide the order,” explains Mandeep. 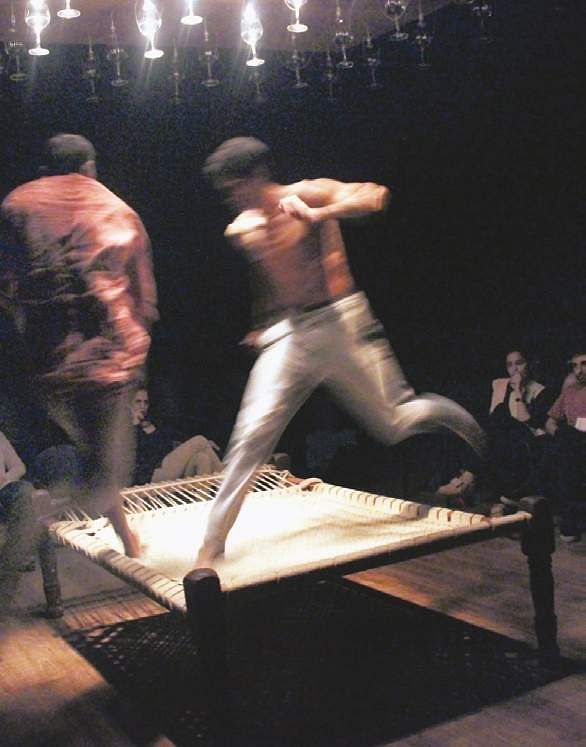 The Delhiite says that with this arrangement, he allows the audience the freedom to make the choice on how they want to view the piece. “No one is asked to view iN one order or the other. This allows for multiple readings of the performance and each person has a different reading of it,” says Mandeep.
Played out on a charpoy, the duet explores the various shades -- carnal, mechanical and emotional -- of an intimate encounter between two male bodies. The performance aims to pose questions around spectatorship, privacy and dissent.

Mandeep spent a good amount of time on research to come up with the choreography. “I found a website displaying 108 gay sex positions, which became my first draft of raw  material to get started on,” he says.
The choreographer then looked at how he could construct little fragments of love. “The idea is to find a balance between love and sex,” he adds.
Mandeep has created a range of fragments of seven to eight minutes, where each piece looks at intimacy in a different way. “At one time it is depicted in a play between finger tips, the other time it is two bodies moving in free space while still being attached at the groin,” he says.

So, did he ever think of depicting this intimacy between two women? “I did, but then I don’t have much experience of such an intimacy so I shied away from the idea,” he responds.
Casting wasn’t a struggle for Mandeep. He talked to four artists he had worked closely with about the performance, because he wanted to cast people he would be comfortable working with. “I brought them in a rehearsal space and in the end took a call on whom to cast in the duet,” he says.  The performers were well aware of the difficulties they would face, informs Mandeep. He says that at one point, one artist decided to quit as he started questioning himself with the piece. “When he regained a direction, he joined us back,” he adds.

Mandeep too went through a face of introspection. “I was questioning myself on what I was making. It looked like porn to me at one point. I dealt with a lot of questions during the journey of its making,” he says.
With the performance, Mandeep made a choice to not make a piece in the realm of provocation, “but then how do you hold the audience’ hand to walk them through,” he asks.
He adds that the stage itself is set on a provocative start. “It is two men in a bed and the piece is about sex. That itself is provocative,” he says. But Mandeep likes to look at the performance as a reflective one. “It is meant to be  evocative and not provocative,” he concludes.
The performance travelled to 17 cities such as Chennai, Aizawl, Ahmedabad, Kanjeepuram, Chandigarh and Delhi.
“In non-metro cities, the engagement with the audience and the reaction was more of a detailed one than the metro ones. They viewed it in more ways than one,” says Mandeep.