Even though the GST Council has announced a reduction in tax rates for restaurants effective from November 15, several restaurants in the city are yet to implement the revised rates.

BENGALURU: Even though the GST Council has announced a reduction in tax rates for restaurants effective from November 15, several restaurants in the city are yet to implement the revised rates. Many are still charging customers 18 per cent GST instead of 5 per cent as per the revised norms. 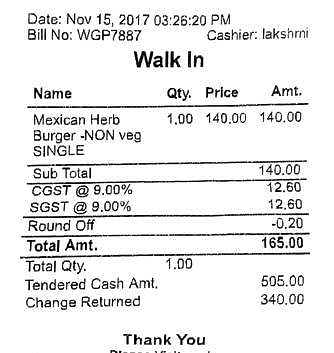 When Express did a reality check on Wednesday, from when the new rates are applicable, it was found that some restaurants in the city chose to charge customers the earlier tax rate citing that they were yet to receive “official communication”. Assistant Manager of a prominent hotel in the city said: “We are yet to receive clarifications from our seniors, so we have not made any changes still.” Another restaurant in the heart of the city had a similar explanation. The chartered accountant of a restaurant on Cunningham Road says, “We got the notification late and we are still updating our systems.”

However, Bruhat Bengaluru Hotel Association representative Virendra Kamat said official communication was already issued and all restaurants were aware about it. “As on Wednesday, they are not supposed to charge 18 per cent. A gazette notification was issued by the Commercial Taxes Department which we have received on Tuesday evening. The restaurant owners are aware of it,” he said.

No price change as of now

Although the tax rate has been reduced to 5 per cent, restaurants are not in a position to reduced prices on the menu. For, restaurant owners continue to pay up to 28 per cent tax on raw material purchased. Not just that, as per the new regulations restaurants are ineligible for Input Tax Credit which they were availing earlier.

Rahul Singh, Vice President, National Restaurant Association of India (NRAI) and Founder and CEO, The Beer Cafe, opined, “We welcome the reduction in GST slab from a very high 18 per cent in an A/C restaurant to 5 per cent without any distinction of the air-conditioning. However, the very concept of Input Tax Credit is central to GST, which is to prevent cascading of taxes. Denying the ITC benefit goes against the very grain of GST and will push up the costs by 10 per cent which will reflect on the menu price. So, effectively the consumer pocket will get a marginal benefit and not as it seems.”

Francis Vellara, owner of Tom’s Hotel added, “Without ITC our input costs are at the highest, but we still have gone ahead with the tax change to avoid inconveniences to our customers.”On the other hand, Kamat felt that there would be an indirect benefit to the restaurant owners. “There has been a 30 per cent reduction in footfalls over the last two months owing to high GST rates. With a lower tax rate, we expect more footfalls, which hopefully will even out the additional costs that owners are having to bear.”

As for the general public, the reduction in tax has comes as a welcome move. “A Deluxe Veggie pizza used to cost Rs 271 before, but today I only had to pay Rs 247, it is definitely a good move as far as taxes are concerned” said Shruthi K, an accounting executive working with an MNC in Cunningham road.

Now we are on Telegram too. Follow us for updates
TAGS
bengaluru restaurants GST GST revised rates