Artist A Naveen Kumar converted his bedroom into his studio because it is not easy to find space to work.

BENGALURU: Artist A Naveen Kumar converted his bedroom into his studio because it is not easy to find space to work. This constraint faced by young artists inspired  Naveen to work on a series ‘81 sq ft Studio’, on display at Gallery Sumukha till September 16.

The display is a mix of paintings and 3D-printed sculptures, which have been fitted into Kavad boxes (an Indian traditional form of storytelling where the box unfolds, showing pictures from an episode of a story).

‘81 sq ft Studio’ is after the size of his bedroom, which is 80 feet wide with a one-foot window. He says, “There's only about four to six feet space left after the cupboards and cot in the room. I sometimes, roll the canvas like a scroll and work on the detailing. I saw my work in entirety only after it was displayed at the exhibition hall.”

The cramping in his room means he uses even the window to work, especially when he is spraying over it. “The sprays have a strong smell. So, I spray keeping the canvas near the window,” he says. But the small space has also worked to his advantage, he says, Naveen is able to pay closer attention to detailing in the work.

Naveen says, “The whole idea of this series is to speak about my studio and how I work there. I sleep, work and live in that space.” Through his 3D-printed sculptures, made from recycled sugarcane fibre, he narrates stories from his life. He adds, “It tackles issues such as deforestation, Nature, urbanisation and water scarcity.” 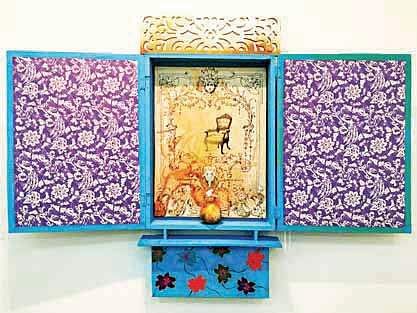 The exhibition has been titled Magical Stories to capture the element of surprise in life. He says things happen unexpectedly all the time. "You close and open your eyes, and there is a new building,” he says. “The city's changing so fast… I recently read an article that said only 12 per cent of the buildings in Bengaluru are occupied, rest are unoccupied because of high rates. Many  middle-class people are unable to afford these houses because they are sold for crores of rupees."

One of his paintings on deforestation shows an elephant flying over and away from a forest, its flight a symbol of our high-handed destruction of Nature and disconnect from it. He recalls a story he heard while on a train journey: "A man told me how his son sold their farm to build villas and sell them off. But, he couldn't sell any. Now, they have lost the land and also money,” he says, adding, “It got me thinking how we destroy Nature to make money."

Another painting has a bear cycling across the city, struggling to find a house. He says he was chased away several times because the owners thought their houses would be dirtied with his paints. “When I look at apartments, I keep wondering why I can’t afford one,” says Naveen. His favourite medium is watercolour and now there is the 3D-prints. He has been working for this series for about a year, it takes about 18 to 20 hours to develop a 3D-printed sculpture.

“I draw the sculptures and give it to the technicians to develop the prints,” he says. Naveen is also a member of Artist Pension Trust, an international organisation which screens and exhibits work of select artists, to help aging artists who may not be able to find work.