At times, 128-seater coach had only two passengers in Express trains between Bengaluru and Mysuru

The occupancy rate on five pairs of Express trains between Bengaluru and Mysuru has more than doubled after AC 3-tier coaches were modified into AC Chair Car.

BENGALURU: The occupancy rate on five pairs of Express trains between Bengaluru and Mysuru has more than doubled after AC 3-tier coaches were modified into AC Chair Car. As per statistics provided, there were countless days across all trains when only two passengers were travelling in the 128-seater coaches.

It has proved good for Railways earnings too. The 3-tier earnings have gone up by a minimum of 1.5 times in one train (Kaveri Express) while it has increased by upto six times in another train (Golgumbaz Express). Revenue boost for other trains fall in between these two.

While this move was effected from October 2016, Railways has computed statistics for April-July 2016 and 2017 for a comparative analysis. While Express trains take anywhere from 2 hours, 35 minutes to 3 hours, 10 minutes between the two cities, KSRTC Airavat AC buses take between 2 hours 40 minutes to 3 hours 50 minutes time.

While 28 Express trains ply on the Bengaluru-Mysuru route, only 10 have AC coaches. Of these only 5 trains were chosen for the modification as they have two coaches under AC 3 tier. The remaining five have only one AC tier coach each. 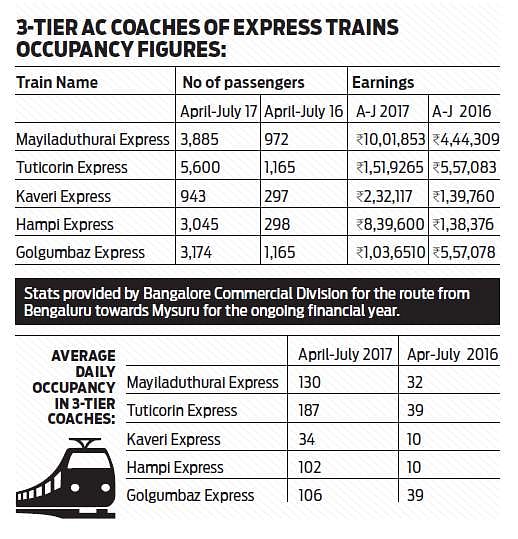 Stay up to date on all the latest Bengaluru news with The New Indian Express App. Download now
TAGS
Express trains between Bengaluru and Mysuru